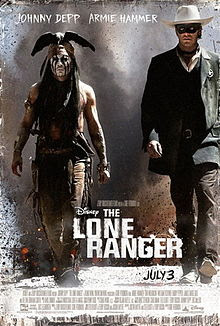 The Lone Ranger is destined to be the most underappreciated mainstream release of 2013, primarily because critics are unable to comprehend (and deciper) sophisticated revisionist filmmaking. Take even the opening ten minutes here: set against the Golden Gate Bridge's construction in San Francisco 1933, the CGI image is as wonderfully metonymic as the deteriorating buildings that open Antonioni's L'Avventura (if not as suitably relegated to the background of the film's "subjects'). That is - in Antonioni, the fractured structures are deterioration, while with Gore Verbinski, the image is a symbol of progress - or is it? The question of destruction or progress becomes a key theme and visual metaphor throughout The Lone Ranger, whose revisionism is fully conscious of it's anti-Western 1970's brethren, though it also acknowledges the indisputable mythos and glee that informs both genre filmmaking and pre-Vietnam Westerns. Perhaps a viewer could call this dual-tact hypocritical, but such an estimation would forgo an understanding of where the Western both came from, was morphed into, and how it - as a relic - can still hold meaning today.

Can societal construction, much like genre filmmaking, be simultaneous destructive and enriching? Is there truly a double bind that accompanies mythologizing and archetyping, one so inextricably entwined within a visual-verbal lexicon, that do defy signifiers is merely a reversal, one that simply replaces an old with new? For Verbinski - yes - these heads/tails options leave little room for understanding the depths that not only inform Nationalistic narratives, but also very little room to actually feel rather than think the mythos, which is what The Lone Ranger seeks, and is quite proficient, at doing.

To the film specifically: a young boy wanders around the fairgrounds of that 1933 setting to find a small wax museum. In it, a Native-American statue stands, with the name plate "The Noble Savage." Such an explicit use of the term, in addition to having the statue "narrate" the film (the statue is actually an old, craggily make-up Tonto (Johnny Depp) will immediately recall Arthur Penn's Little Big Man for those who know it), immediately announces itself as interested in grappling with mythos. Unlike Django Unchained, for all its allusion-heavy, often striking visual palette, The Lone Ranger is interested in film-as-essay, while Tarantino is interested in film-as-wish-fulfillment. The former is a more daring, difficult approach - yet again one unappreciated by tamed-attraction seeking critics. The explicit identification of an archetype through visual-textual means pays reverence to both a cultural and critical past, while being irreverent enough to question its legitimacy. Moreover, Verbinski seeks to marry the big-budget action film with the politics of a revisionist Western, a move that, to my knowledge, makes it a rather one-of-a-kind film. Yet, the merging of high politics and low spectacle is one that ultimately makes a great deal of aesthetic sense, as it unveils a true understanding of film lore (and fascination with such lore) that is not only founded upon cinephilia, but its capacity to indoctrinate.

In his 2012 memorial of Andrew Sarris, Armond White rightly lambasted pundits who remembered Sarris by claiming he "loved movies," and that his work was "greater than any fanboy obsession," which speaks to what is happening within The Lone Ranger that ultimately separates it from the textually shallow Django Unchained. Interested in mining films for significance (visceral and narrative), rather than wallowing in their capacity for affectual bliss, Verbinski achieves a gamut-running effort to truly revise not just the Western, but the Action film as well (and within that, the Superhero film) - the Western's inevitable Urban spawn. Yet, like the Action film, The Lone Ranger views the progress towards Metropolis both an endlessly alluring and detrimental prospect. The greed of the villains (William Fichtner and Tom Wilkinson) corrupts a devoted officer (Barry Peppar) - the particulars of which intimate Wall Street lasciviousness for capital gains at the expense of values both material and symbolic. In that sense, the tidy moralist/lawman John Reid (Armie Hammer) is the Batman to Fichtner's Joker and Wilkinson's Two-Face - though, he is ultimately more Robin or, if you prefer, Jack Burton to Tonto's Batman (or Wang Chi). A Bruce Wayne-type that must ultimately embrace violence if he wishes to rid his community of corruption (and wear a mask, natch), Reid is a rather pathetic figure, given how naive his character plays within Verbinski's context. An idealist unable to understand underlying concepts of progress and evolution (in many senses), Reid aligns nicely with 2012's Dredd, another Urban-Western that infused such questions of law-abiding violence with noirish fatalism, particularly that of Fritz Lang's The Big Heat (1953). These men all believe they act out of a law-driven, secular righteousness. Reid proudly holds a copy of John Locke's "Two Treatisies of Government" and claims "this is my bible." Thus, the actions of rational men are aligned (and as anti-humanist) as religious dogma - though Verbinski implies that each are a necessary component of nation building. Yet, it speaks to an underlying idea of the revisionist Western - that the very sensibilities one uses to build a community (ambition, community, individual freedoms) will inevitably tear them apart. By locating such a logic across multiple genres, not just through visual signifiers, but through an ethos, The Lone Ranger is certain to remain one of the most textually (and visually) rich films of 2013.
Posted by Clayton Dillard at 11:40 AM