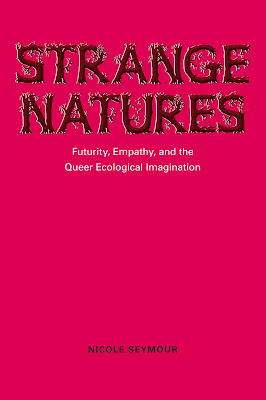 Ecocriticism meets Queer Theory in Nicole Seymour's Strange Natures, a dense, multi-faceted examination of the ways in which recent works of literature and films have sought to overturn the notion that queerness is inherently against nature. In doing so, Seymour discusses films such as Safe (Todd Haynes, 1995) and Brokeback Mountain (Ang Lee, 2005) to demonstrate how queer behavior not only transgresses the realm between public and private space, but also ways in which these outwardly queer films are also heavily concerned with economic and financial issues, such as the neoliberal shrinking of the public sphere, along with privatization of land ownership as concurrent with the privatizing-to-publicizing transformation of GLBTQI life. Moreover, the heart of these inquiries can be traced to an identification of queerness with urbanity - as being "unnatural" to spaces more often affiliated with nature, and that the juxtaposition of the two - the queer with the "natural," is inherently at odds. Seymour seeks to show how such inclinations are not only incorrect, but that futurity is explicitly tied to queer concepts, and political underpinnings as such have revealed themselves to demonstrate that tenets such as "denials of global warming so often seem to go hand in hand with homophobic agendas." Seymour aims to reconceptualize not just the dividing line between humans and non-human animals, but also embrace interdisciplinary modes of thought to bridge these often disparate methodologies.

Like many a monograph, Seymour adheres to a familiar structure: introduction, four chapters of case-studies, and a brief conclusion. The introduction serves the most rigorously theoretical function, though continuous engagement with theoretical concepts persists throughout. Basically, Seymour is interested by the ways in which approximately three decades (1960-1990) of thought have contested "nature" as a concept, and sought to "denaturalize" in order to reinterpret the underpinnings of dominant ideologies. The most rigorous (and convincing) study comes via Brokeback Mountain; in this chapter, Seymour convincingly demonstrates how queerness is, within the film, not only dealing with sexuality, but also, and perhaps predominately, the transgressions of lost capital for private interests. As Seymour explains it, Joe Aguirre (Randy Quaid) hires Ennis (Heath Ledger) and Jack (Jake Gyllenhaal) as ranch hands to "maximize the profits of the private businessman using public land...the queerness of their actions, in other words, lies in how they disregard private, capitalist demands on public, natural space." Moreover, Seymour demonstrates how Aguirre's language ambiguously relates to both homosexual behavior and poor business practices. Thus, the language used is as much related to class-based equations (poor = lazy) as queer. Also entwined is the expression of "unruly desire" in public spaces, which Seymour nicely ties with the film Surf Party (Maury Dexter, 1964), which is briefly seen on-screen by Ennis at the drive-in. For Seymour, even dating back to such beach-blanket films, the inclination to relegate desire out of public space has primed an articulation for the queer ecological that Brokeback Mountain makes explicit.

Seymour's other chapters perform in much the same way - sharp, adept, and convincing, though the discussion of Safe slips a little too often into basic formal analysis disguised as a larger discussion on rethinking "regimes of visibility." Even in these lesser chapters, however, Seymour renders refreshing, revisionist readings. Furthermore, as any proficient scholar would, Seymour offers recourse to previous theory, from heavy-hitters such as Lee Edelman and Judith Butler to essential articles - namely, John D'Emilio's "Capitalism and Gay Identity," which "explains how capitalism produces the conditions necessary for individuals, and queer individuals in particular, to live outside of familial and reproductive structures, - but also produces homophobia and other forms of regulation to maintain the family and biological reproduction, thus reproducing itself by ensuring the next generation of workers." These types of inclusions make Seymour's line of thought difficult to dispute, as the paradoxical forms of late capitalism both ensure the presence, but guarantee the suppression, of queer life, much like the perpetuation of queer-as-urban discourses have afforded credence to a "nature-over-nurture" ethos that dominates many arguments against same-sex marriage. Seymour says that since "queer ecology and ecocriticism have been conceptually constrained by homophobic discourses that position queers as 'against nature,' as well as by queer discourses that embrace the designation as a form of dissonance," sound, alternative readings must appear to correct these errors in order to allow a "queer ecology" to emerge. Doing so would both reshape means for understanding nature/queer relations, but also end the idea that a queer ecology would be "strange." With brazen, well-wrought scholarship, Seymour has given such an endeavor a commendable dawn.

Strange Natures was released by University of Illinois Press on May 22. To purchase it, click here.
Posted by Clayton Dillard at 1:01 PM