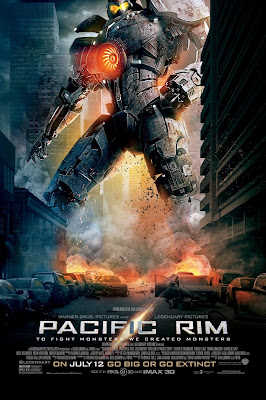 Since Guillermo Del Toro's filmmaking has been almost neatly divided into two halves (three Spanish-language horror features and four horror-oriented Hollywood films), the arrival of Pacific Rim - easily the director's "largest" undertaking, at least in terms of budget - signifies something of a symbiosis of those two disparate career tracks, and asks an essential question: can one fuse small horror interests into a massive-budgeted sci-fi actioner? Moreover, an even more essential question: what is at stake in making these two lines join? The answer, it seems, is both muddled and troubling - at least, that's the central conclusion one must reach from viewing Pacific Rim, a film that is perhaps too smart for its own good, helmed by a man too knowledgeable (but in a geek's way) of films past, and altogether unpleasantly dedicated to winking replication of ethos past, rather than establishing one of its own for the 21st century. The film, which involves giant monsters (called Kaiju - they are bad) fighting giant robots (called Jaeger - they are man-made, thus good), the latter of which are created, manned (or wo-manned as it were) and funded with the explicit purpose of combating these mysterious creatures, is less an art film than an artfully-made commercial venture for Del Toro, meant to celebrate and embrace fanboy/girl proclivities rather than satirize them.

As artfully-made product, Pacific Rim begins like many a sci-fi, near-apocalyptic feature, with a prologue that establishes the stakes. Voice-over spoken by the deep, throaty-masculine Raleigh Becket (Charlie Hunnan) explains the Kaiju's emergence on Earth, in a globe-trotting montage of destruction that goes from San Francisco, to London, to Hong Kong. Del Toro and cinematographer Guillermo Navaro do an excellent job of maintaining a sense of movement and clarity throughout these CGI sequences (nearly every scene of the film is CGI-laden), though there is seldom anything particularly note-worthy about the compositions, beyond their bend towards comprehension. The same could be said for the voice-over, which denies mystery through explication, rather than affording it through audio-visual exploration. Perhaps the highlight sequence of the film is the first battle sequence between a Kaiju/Jaeger, as the relinquishing of music gives way to a symphonic clanging, scraping, and wonking of mechanical/electronic ambiances that demonstrate how proficient Del Toro can be at constructing pure spectacle through sound/art design. The exchange of blows, much like the exchange of gunfire in John Woo films, attains a balletic grace and offers a visceral charge at the giving over to embracing noise and fury over language.

Problem is, Pacific Rim cannot maintain its interest in such spectacle because feature filmmaking necessitates a narrative as well. That narrative is less an ingenuity-guided deconstruction of genre principles than a reinforcement of them - only less mindful viewers will find anything subversive here. Stacker Pentecost (Idris Elba) needs a squadron of pilots to helm a newly constructed series of Jaegers to combat a new-and-improved breed of Kaiju. He thus calls upon Raleigh, now working as a construction worker since his brother was killed in the prologue (past trauma); Mako Mori (Rinko Kikuchi), a brainiac, but untested noob with past trauma; and Dr. Newt Geiszler (Charlie Day), a goofy scientist who stumbles upon a special ability to communicate with Kaiju. The central conceit of the first 1/3 is a knowing construction of camaraderie between an initially contentious, but ultimately strong core of individuals. However, screenwriter Travis Beacham and Del Toro find little truly intelligent avenues to take these characters and their backgrounds. Unlike, say, Starship Troopers, which gave itself over to more absurd, darkly violent inclinations, Pacific Rim has its players simply spar, both in simulated (and innocuous) sequences of hand-to-hand combat and a slew of "She's ready!"/"She's not ready!" exchanges. Once the new Jaegers fight the new Kaiju, the sequences become a rehash of the opening's strengths (which become less with each subsequent copy) and are sullied by a silly premise that the Jaegers must be piloted by two people, each of whom must "drift" together (or place their minds on an identical frequency) in order to operate the machine. This necessarily leads to a moment when one pilot is paralyzed by a memory and the other pilot must "go in" and break the drift. Instead of using such a premise to engage surrealistic imagery, Del Toro plays it like Inception-lite, using a nearly identical sequence structure and sensibility. The remainder of the film, though it features several gorgeous monchromatic, neon-infused shots/sequences, plays out on much the same knowingly goofy frequency.

Perhaps the only refreshing aspect to Pacific Rim is its unit-based sense of meaning, built less on introspection than teamwork. However, that is only refreshing given current aesthetic/narrative trends and is less new than retrograde - empty Nationalism devoid of real-world referents. That is, above all, what makes Pacific Rim so harmless and too-easily digestible - its preference for "we saved-the-day", rather than "we blew it" discursive measures. If Pacific Rim is just supposed to be "a good time," then that says more about its makers and audience than the film itself.
Posted by Clayton Dillard at 10:41 AM