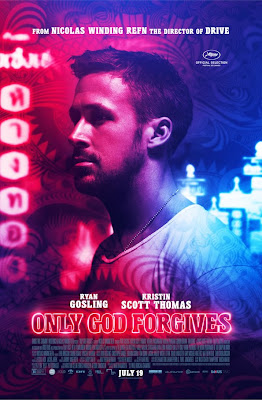 Stanley Kubrick once said (and I'm paraphrasing) that a film should be more like music than fiction  - that it should be a progression of mood and feelings before (but not rather) than a theme.

Julian (Ryan Gosling) enters a hallway. He is half-lit, primarily by an overhead red light that allows his turning head and furrowed brow to be seen. Julian stands in a bathroom, looking into a mirror, this time bathed in a soft, blue light. Julian lounges on a couch, staring up at Mai (Yayyaying Rhatha Phongam), then looks to his left at two men laughing, drinking. What can he be thinking? More importantly, perhaps - what is he feeling? When he clenches his fists - what is the takeaway?

By the time you reach that question in Only God Forgives, Nicolas Winding Refn's directorial talons should already be lodged underneath your skin and, regardless of what answers may come from such a set-up within the course of the film, the established devotion to attaining a mood - a sensorial environment - should take precedence and become the ultimate consumption.

That is not to say that Only God Forgives seeks to articulate style over substance (remember: before, not rather). In fact, Refn's neon-saturated images, disaffected, statuesque characters, and Cliff Martinez's ambient-electronic oriented score achieve a rather profound philosophical, borderline academic discursive mode, making it the most Kubrickian film since Eyes Wide Shut (Larry Smith, the DP for Eyes Wide Shut, also shot this).

However, saying that Only God Forgives is Kubrickian is not an end, so much as a means to express, in words, what Refn might be up to here. Three karaoke scenes feature Chang (Vithaya Pansringarm), a retired Bangkok Policeman whose notion of justice is self-appointed executioner. These scenes are perhaps the key to the film, though there are numerous other sequences of essential relevance to consider. For now - Chang is called upon to kill Billy (Tom Burke) for the rape and murder of a 16 year-old girl. Seeking vengeance, Crystal (Kristen Scott Thomas) demands Julian avenge his brother's death by hunting and killing Chang, himself. I leave narrative at this point because, well, discussing Only God Forgives as a genre film will prove as futile as discussing Breathless as a gangster film - only as a jumping off point are these films interested in genre inquiry. Rather, Refn is interested in audio-visual capabilities of a controlled, almost stifling rigidity. Like Kubrick, items are strategically placed within the frame to articulate depth and space and characters often look or stare rather than speak.

Once one ceases looking for narrative meaning as end through normative means, the film unlocks as an existential place of absurd, fetish-driven fears come to life, though in a post-human sense. That is - Refn employs human figures rather than human beings to inhabit his quest for the 21st century heart of darkness, while following the philosophical logic of Kubrick's oeuvre. Kubrick, often flippantly labeled a misanthrope, never made a film that did not hold the value of human and moral decency with the highest regard - it was his growing conclusion that such aspirations were unattainable with capital as a human being's driving force. Thus, the final scene of Paths of Glory (1957) offers hope of communal capability and cooperation - that cultural unity could be central in ending human destruction. These hopes became progressively lessened for Kubrick, perhaps culminating with The Shining (1980), where an inherent, cyclical subjugation of one race over another would remain constant. Finally, with Eyes Wide Shut, Kubrick announced the pending death of Western civilization due to hubris, unchecked avarice, and psychosexual instability. With Only God Forgives, Refn is one of the first filmmakers to attempt and resurrect Kubrick's end goals, but has fully taken them into the post-human era, where speech and affect can no longer resonant to create a meaningful discourse. What's left in futurism is nihilism - that is, a continued acknowledgement that meaning is dead. Thus, Chang's presence is a personification of these losses - the death, as well, of order, justice, and morality. When these possibilities become lost, all that's left are the senses, which Chang can also take away, as he does with a man who refuses to "see" and "hear" him. The disobedient man might as well also be the viewer who continues to demand significance via 20th century means.

Refn dedicates his film to Alejandro Jodorowsky, which will inevitably send cinephiles fleeing to seek correlations between the two filmmakers. Rather than seeking Tarantinoesque, direct referencing, one would be wiser to accept Refn's dedication as one of acknowledging cultural inheritance - particularly an inheritance of the absurd, surrealist dimensions that are indispensable at informing how curious minds understand cultural formation. Refn is not the heir to Jodorwosky, he is not the heir to Kubrick - rather, with Only God Forgives, he assumes a rightful place beside them as radical conceptualizers of cinematic representation.
Posted by Clayton Dillard at 8:22 AM