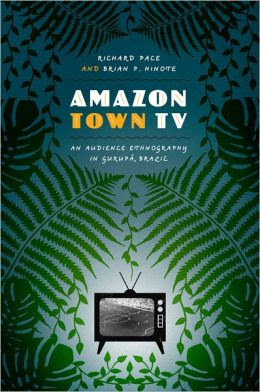 The interdisciplinary aims of Richard Pace and Brian P. Hinote's Amazon Town TV make it a worthwhile venture, perhaps more than the actual scholarship itself, which breaks little new theoretical ground in terms of television studies, but does serve as a fascinating ethnographic study of the potential for television's sociocultural effects in Gurupá, Brazil. Of course, though Gurupá is the specific focus here, the approach is what will really be of importance to television scholars; Pace and Hinote spend the first section of the book defining their nearly 40 years-in-the-making project, which begins with a seemingly straightforward question: "What do you think of television?" Naturally, the rhetorical aspect is contingent upon the cultural standpoint of the respondent, and Pace and Hinote utilize this question throughout as a means to better understand "the long-term sociocultural impacts of television programming and thus pay critical attention to those messages that have been repeated over and over again for decades." These sociological aims are rather straightforward and expected for any such study; however, the methodology is what's of import here. As such, the pair adhere to what Jenny Kitzinger has termed "New Media Influence Research," which is a "hybrid assemblage of studies researching the interface between media's representations of reality and how viewers talk, think, and behave in response." Subsequently, major names such as Stuart Hall and his tripartite categories of reception (appropriated here into four) are discussed, as well as Pierre Bourdieu's concept of cultural capital. The methodological background is fleet and sparse, functional as both an introduction and refresher to these varying theoretical concepts.

Nevertheless, it is Louis Althusser's notion of interpellation which serves the basis for the monograph - that is, "the point at which an outside voice calls an individual, who by acknowledging or responding to the call becomes subject, in a sense being defined by the call." Thus, what's sought is an identification whereby the viewer acknowledges herself as subject and acts in response to being identifies as such. The key for Pace and Hinote is that they do not reject "positivistic epistemology" as a valid source of attaining information - something that a more "practice theory" based approach would reject.

The bulk of the book seeks to contextualize the ethnographic ends, which essentially involve much quantitative data related to the emergence of television within households, the types of programming that dominate much of the limited airwaves, and, finally, how the emergence of widespread televisions has potentially affected social views/behavior within Gurupá. As such, several chapters are subsequently devoted to the four reactions one may have to interpellation, which is Pace and Hinote's major theoretical contribution: heeding, missing, ignoring, or resisting. Tables, charts, and other empirical data contribute to forming the presence of each form of receiver communication. The rather rigorous data convincingly offers each of the four as not only distinct possibilities, but that they are not singular responses in-and-of themselves. That is, "even the most straightforward heeding of television's messages leaves room for viewer interpellation." These conclusions, if not revelations, function well as reinforcements.

Amazon Town TV, while a functional ethnographic study using television theory-based methodologies, reads a bit too much like an exercise/case study to be truly remarkable. Much of that can be attributed to the modest tone, which never claims to be reforming the field - instead, a contribution to it. Pace and Hinote seek a "nuanced understanding of how media influence operates," though their theoretical formations are less nuanced than appropriated, while their conclusions regarding Gurupá remain the heart and strength of the monograph. Therefore, as an area specific ethnographic study, Amazon Town TV is a rather proficient examination of the ways in which mediated-representations within a domestic space can have significant sociological effects.

Amazon Town TV was released by University of Texas Press on May 15th. To purchase, click here.
Posted by Clayton Dillard at 12:39 PM