Fruitvale Station has, to my eye, yet to draw comparisons to Paul Greengrass's United 93, but that's the film that kept coming to mind during my viewing. Like that film, Fruitvale takes a docudrama, almost real-time approach to its known, fortold tragic end. Such an end being the case, one must question the significance for a re-enactment. That is - films of this sort can quickly become exploitive in their desire to manipulate confirmation bias viewers. In Greengrass's case, he seeks an unseemly blend of docudrama aesthetics and pornographic insistence on visualizing the unknowable terrorist event. Fruitvale, however equally problematic in questions director Ryan Cooger leaves unresolved/unaddressed, nevertheless employs an interpretive lens - an almost fable-like moralism - that, even if heavily reliant on narrative coincidence and appeals to cosmic disgrace, is far more truthful, compelling cinema. Also unlike United 93, Fruitvale is anchored by a true actor in Michael B. Jordan, whose naturalistic, though undeniably measured performance commands the screen over Coogler's rather pedestrian visual sensibilities, though give him credit for pulling such visceral performances from Jordan, Melonie Diaz, and Octavia Spencer. Wesley Morris has said it best in his recent discussion of this film in relation to the Trayvon Martin ruling.

Nothing about The ABC’s of Death suggests anyone  involved (of importance) took the proceedings very seriously. At 26 films and roughly two hours, this omnibus dump represents the worst, most solipsistic inclinations of indie filmmaking - that anyone with a camera is a filmmaker worthy of having their voice seen/heard. Perhaps it is best to look at the top talent involved; Ti West chose to make an entry that barely runs two minutes, and essentially consists of a woman deciding whether or not to flush a fetus down a toilet. Hardly chilling, the jokiness of it suggests apathy over understatement. Moreover, Adam Wingard chose to go faux-reflexive for his film, ending with himself and screenwriter Simon Barrett accidentally shooting each other to death. Truly hilarious (but a big "fuck you" to anyone who took this seriously).

Happy People: A Year in the Taiga (Werner Herzog) 2/4

A misfire such as Happy People reveals just how difficult convincing documentary filmmaking can be. Like Grizzy Man, Werner Herzog has sifted through hours of previously shot footage in order to appropriate them for his typically lyrical, incisive voice-over commentary. I say typical, because neither adjective fits here. Though outwardly his Siberian ethnography appears detailed and nuanced, the progressively empty postulations would barely pass for adequate Discovery channel insights, much less Herzogian. Moreover, the seams show in the stitching of footage, which lacks the idiosyncratic juxtapositions and questioning commonly found in his films.

More or less picking up where Yossi & Jagger (2002) tragically ended, Yossi finds...Yossi (Ohad Knoller) moping through life in Tel Aviv as a cardiologist ten years later. Eventually, he meets Tom (Oz Zehavi), and it starts to look like Yossi may be able to love again. I use rather cliched narrative terms because that’s precisely how Fox plays the material - much like Linklater’s Before Midnight, Fox assumes the material holds significance merely because of the cultural capital earned by his 2002 film. However, where that film had sensual and political resonance, along with The Bubble (2007), Yossi plods through indulgent and rather obvious dramatic traumas, though Knoller’s captivating performance helps to combat Fox’s complacency.

Indies usually aren’t shot with nearly the eye for composition as Tom O’Brien’s Fairhaven; the excellent use of cinemascope lends even simple dialogue scenes a tightness and clarity that suggests mid-70’s Woody Allen - unfortunately, that’s the only way O’Brien’s film resembles Allen. Narratively, the Boston-set reunited friends premise barely registers as cinematic, given a rather made-for-TV pathos that, frankly, isn’t hard to predict if you’ve seen the poster, which features all of the characters smiling, laughing, or staring in singular frames. O’Brien’s dialogue strains to be authentic and clever, but with exchanges such as: “Do you light candles during sex?” “Well, I don’t light them during sex - like, not while I’m having sex,” these strains rarely yield worthwhile insight.
Ginger & Rosa (Sally Potter) 2/4 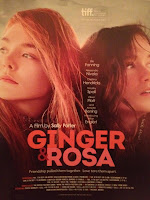 Sally Potter’s latest is a fascinating film, though not for the reasons one might like or expect. In an odd move, Potter settles into an historical narrative with the simplicity, straightforwardness, and plodding sensibilities that Orlando, her 1992 masterpiece disgraced. There’s the fascination: why has Potter seemingly forsaken her earlier interests? Simply a coming-of-age tale that’s content to pay almost no attention to formal significance, only the compelling performances of Elle Fanning and Alessandro Nivola retain interest.

Nicolas Winding Refn's neon-saturated images, disaffected, statuesque characters, and Cliff Martinez's ambient-electronic oriented score achieve a rather profound philosophical, borderline academic discursive mode, making it the most Kubrickian film since Eyes Wide Shut. Refn dedicates his film to Alejandro Jodorowsky, which will inevitably send cinephiles fleeing to seek correlations between the two filmmakers. Rather than seeking Tarantinoesque, direct referencing, one would be wiser to accept Refn's dedication as one of acknowledging cultural inheritance - particularly an inheritance of the absurd, surrealist dimensions that are indispensable at informing how curious minds understand cultural formation. Refn is not the heir to Jodorwosky, he is not the heir to Kubrick - rather, with Only God Forgives, he assumes a rightful place beside them as radical conceptualizers of cinematic representation.

The best documentaries transcend simply montaging together facts to present a “case” to an audience: they live, breath, and often call upon other cinematic genres for their effect. The Thin Blue Line, perhaps the greatest documentary of all-time, took those aims to unprecedented levels in its fusion of fact and fiction (via staged re-enactments). While Blackfish does not attain such an audacious means of expression, its outrage comes through just as forcefully in the tight, measured filmmaking, built for maximum effect, as it complexly weaves together disparate interviews, timelines, and even animation sequences to illustrate a deep-seeded narrative of corporate corruption, which takes the form of a psychological murder mystery - all involving killer whales. Equal parts activism and tightly-wound genre film, the punch of Blackfish comes in its straightforward, but heart-wrenching reveal of the damage and pain caused by deceitful narratives of peace and happiness overlaid atop extreme negligence and ethical lack. Martin Scorsese recently called for more education of visual culture in schools. The implications here suggest such a focus is not only necessary, but urgent.

With Crystal Fairy, Sebastian Silva takes a significant step not only in his own oeuvre, but in setting the bar for filmmakers focused on representing contemporary generational angst. Making the whiny/pouty uncertainty of films like Juno and Garden State look absolutely frivolous and naive by comparison, here are characters, scenarios, and an astute formal interest that deserves discussion alongside the films of Rohmer, Truffaut, and Hellman - there’s not a false note to the neurotic and fidgety Jamie (Michael Cera), drifting and chill Champa (Juan Andres Silva), or the uber-free spirited Crystal Fairy (Gabby Hoffman). Even better, Silva denies almost all psychological causality to explain his characters’ hang-ups, demeanors, and desires - excepting a single, devastating reversal near the film’s conclusion. That’s where Silva’s strength lies here - an ability to reveal morality without either forcing or sacrificing an interest in underlying truths of human interactions. Sharply ironic and wholly seductive, nearly every scene in the last half has either a built-in reversal or a keen sense of its characters desires to hover within the moment, which Silva never treats with a simplistically condescending or condoning lens. In an era where raunchy, douchebag comedies overfloweth, Silva’s gentler approach is the long awaited antidote.

Computer Chess is dangerous, volatile satire masquerading as goofy mockumentary. Christopher Guest generally makes funny films, but he’s never made anything that cuts as deeply as Andrew Bujalski’s unnervingly simple, yet deeply conceptualized and existential presentation of cultural obsession and technological determinism. Outwardly, humor comes from the awkward interactions of computer programmers bickering and stressing over a chess tournament - though as one member stresses, “I’m not a chess player - I’m a computer programmer.” Such a seemingly slight distinction, however, speaks volumes to the film’s inherent tensions regarding academic discourse and its tendency to obfuscate and isolate those who seek its bearings - or is it capitalist structures that pervert and, ultimately, sustain corporate power (as one player puts it, that was “like Goliath beating David”). At times almost Kafkaesque in its absurdist exchanges and scenarios, then seemingly Bunuelian in juxtaposing absurdity on absurdity, nothing about Computer Chess is either simple to comprehend or easy to discard - an exquisite case of form complementing content.

Posted by Clayton Dillard at 1:58 AM