Is truly revisionist filmmaking still possible? A 20th century notion now toothless, Kim-Jee Woon employs nostalgia and redux with equal parts indifference, content to cast Schwarzenegger into a sea of bullets, one-liners, and cheek side characters, with the visual/sonic proclivities one might expect from such a gleefully self-aware undertaking. Moreover, there's a deadening of sensual meaning, much like Woon's I Saw the Devil, that numbs any affectual engagement with the action image. Scholar Laura Marks once used Ahnuld for an example of the time-image, where he picks up a gun and, instead of firing, goes into reverie. Not here - bang bang boom.

Don't call his penultimate feature "Hitchcockian" - that assumes mere imitation. Like Brian De Palma's best films, Soderbergh uses a contempo-thriller premise to explore screen-as-urban space, while making liberal allusions to comparable films past. A woman's picture that morphs into a wronged-man whodunit, the pleasure of genre informs the twists and turns, not simply the mechanations of plot development. There's an indelible quality to Soderbergh's recent films, working from within genre and mainstream cinemas to deliver a death blow to the art cinema of old - Soderbergh made himself a one-man wrecking crew. Will astute filmmakers take note?

The first fifteen or so minutes of A Good Day to Die Hard could mislead one into believing that John Moore is attempting some sort of abstract action film; the saturation of colors seems off, much grainier than usual. An early exchange between John McClane and a nameless federal agent forgoes establishing shots and treats the talking heads as just that, disconnected from the rest of the mise-en-scene. However, the seeming abstractness slowly reveals itself as simply inept, since little on a visual or narrative level develops an kind of consistency - or even consistency in disconsistency. This is paint-on-a-wall filmmaking at its most uninteresting, as Moore is simply clueless rather than ambitious. By the time McClane (exhaustedly) utters his signature catch-phrase, the babbling and empty pyrotechnics have depleted even that menial joy from taking effect. 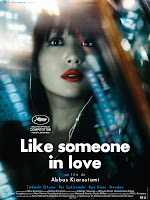 Kiarostami continues his oeuvre-long interest in people riding in cars through cities, searching for multiple levels of meaning. His latest venture changes the setting to Tokyo provides a neon-soaked visual palette as yet unseen in his work. Off-and-on screen space remain of primary interest - a filmmaking lesson wrapped in a narrative. That narrative concerns the way urban spaces tear at the individual's familial responsibilities and affords the opportunity for the fulfillment of violent aggression. Formally playful, but thematically rigorous, it's one of Kiarostami's most forceful efforts - if not as staggering as Close-Up or Ten, its sure-handed sense of looming violence as something to inspire dread, not glee, remains riveting.

When a film like Spring Breakers drops, it's difficult not to let a persistent question loom over it: why now? Korine answers that social relevance question with a resounding "I don't give a fuck," instead employing his characters as hyperbolic genre ciphers, distortions so unidentifiable, the work could positively be labeled deconstruction. Nevertheless, Korine provides a dense visual palette, refusing to eliminate the pleasures of the flesh that a more "reputable" filmmaker might shy away from. Meant to be dirty sexy and perverse, the fetish images appear as matter-of-factly as Franco's cornrows stay intact. A pop spectacle of hard-to-define essence, Korine, much like the non-characters in his film, are not interested in your paltry social commentary - they would rather feel something - anything.

Puns as titles of college-themed films must go. They were supposed to have died out in the 90's, with now unbelievably earnest efforts such as With Honors (1994) or, certainly, by Accepted (2006). Yet here is Admission, with voice-over wisdom, a leisurely sense of comedic pacing, dramedy-focused pathos, and a "big decision" scene that forces the protagonist (here, Fey's without-a-man admissions officer at Princeton) to, well, make a big decision that will...affect the rest of her life! Everyone slogs through this one, including director Paul Weitz, whose best directorial credit to date remains his first - American Pie (1999). At least that film is inspired and has rightfully had a lasting pop cultural impact. This time-warp of a film is so thoroughly middlebrow, so content to be innocuous and disposable, that the only I can rationalize having seen it was that I was sitting on a flight from Dallas to San Francisco. Reading the American Airlines magazine would have likely been more fruitful.

The Place Beyond the Pines (Derek Cianfrance) 3/4

Many critics are quick to dismiss lengthy, would-be epics as "bloated" or "incongruous" or "insert another relatively worthless adjective here." That's because critical taste seeks to penalize ambition and reward mediocrity. Though "The Place Beyond the Pines" garnered a host of positive marks from critics, several took issue with the film's time-jumping narrative structure and, since they felt these disparate pieces didn't neatly (or tonally) congrue, decided to give the film an overall negative review. I suppose my feelings are actually much the same - Cianfrance relies on contrivances and convenient plot devices to make his Indie epic tick - but then, there are so many moments and scenes that work unto themselves, that seeking a flawless underlying logic might not only be unfair, but also reductive and basic. Can a single shot make a film? Films are composed in parts - Cianfrance knows this and acts accordingly, making his latest one of the most fascinating American films from the first half of 2013.

If anything, a film about cinematic obsession should root its inquiries in a certain context, thus establishing the psychological grounds upon which these endeavors commence. In trying to deny those tendencies, Rodney Ascher renders his doc about The Shining and its online following utterly meaning (and humor) less. Instead of properly introducing the persons involved, Ascher only allows their voices to be heard, leaving their faces unseen, a move that could be meant to make them "ghostly," an echo of themes from the film under debate; it could be a self-conscious gesture to mimic internet anonymity; or, most likely, it is a subterfugal conceit that allows cultural obsession to unthoughtfully persist, bestowing credence upon voices merely because they are voices - one of the internet's democratized fallacies. Moreover, the voices essentially perform (weak) close-readings of the film which, outside the context of the film (and the film) itself, carry little relevance. A comprehensive miscalculation.

Writer/Director/Editor/Director of Photography/Composer/Star Shane Carruth makes films like no one else - well, perhaps he makes films like Terrence Malick, Maya Deren, or Hollis Frampton, but his would-be thriller narrative provides an added element to the sensorial, rhythmic image-making. If poetry is predominately about sound and meter rather than imagery and significance, Carruth has attempted to transfuse those inclinations into the cinema, landing somewhere between early modernist avant-garde and impressionist pastiche. A whole new kind of postmodern, Carruth's refreshing, consistently challenging style of filmmaking invites either cheers or jeers, swoons or snoozes. Any comprehensive embrace of the latter two inclinations would be sadly dismissive, though the absurd amount of one-man filmmaking credits for Carruth could only contribute to wanting to call his portentous bluff - if only the film itself weren't so damn mesmerizing.

To the Wonder (Terrence Malick) 4/4

For his last three films (including The New World (2005) and The Tree of Life (2011)), Terrence Malick has been archiving images. Some resplendent, others sublime, yet others melancholy, Malick is the quintessential maître des cérémonies for the post-cinematic age. He envisions livelihood with digital logic, informed by impression and continual reformation, as is consistent with the ethos of living in an ubiquitous media age. Shockingly, none of the reviews mentioned above note the film's opening shots, which are from the smartphone of Neil (Ben Affleck), whose role as disaffected metteur-en-scene is immediately established through these opening scenes. In fact, the shot of Neil, holding beloved Marina (Olga Kurylenko) as they see themselves through the mirror-image projected by a train window, is not discordant with scenes from Paranormal Activity (2009), in which Micah films himself and girlfriend Katie in front of a  bathroom mirror. Contemporary spaces allow for the immediate identification of self - at least the outward self - which will be contrasted by the film's pastoral imaging, in which Malick implicitly asks whether the image of memory (no matter how charged with affect), can ever be capable of matching spiritual presence. To initiate this line of discourse, Malick continues to prefer imaging that refutes much sense of spatio-temporal continuity.
Posted by Clayton Dillard at 11:05 AM