The Digital Pastoral: Terrence Malick's To the Wonder 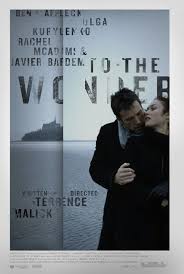 Predictably, Terrence Malick's To the Wonder has been attacked by film critics as an empty, ridiculous, pretentious puzzlement of self-parody that might appeal to people who like to watch grass grow. Perhaps less predictably, though, are that these words have been been directed at the film by "important" film critics, from esteemed publications such as Rolling Stone, The Village Voice, Slate, The New York Times, New York Magazine, and New York Observer. Moreover, their reviews are riddled with jabs, deliberate misdirection, and sometimes blatant disinterest in film analysis, which takes a secondary position to nearly a dozen jokes about Malick's seeming obsession with "twirling" women and whispered voice-over. The reviews are not only worthless for debate (most of them are indignant tirades against the film and/or, in some of the slightly thoughtful discussions, remain unable to offer more than workmanlike comments about its narrative refusal, impressive cinematography, and enigmatic demeanor), but actually squash debate by implying something rotten at the film's core that renders it worthy of derision and persecution. Such are troubling developments, not least because these dwindling critical "gatekeepers" have revealed themselves as unworthy of serious consideration (along with around 90% of the other "reviews" posted by "critics" on Rotten Tomatoes), leaving only a scant few critical voices across the internet to be required reading on a weekly basis.

The trouble is, a Malick film inherently reveals what is rotten about contemporary film culture. Quick, thoughtless, reactionary reviews (which are now the equivalent of angsty, solipsistic blog posts, rather than considerate examinations) are the norm, churned out at record speeds to offer the first take and, by nature, often lack not just coherent discussion, but any semblance of idea and scope for a latest work's significance beyond the immediate. The reviews are fleeting, fragmented, and not very user friendly. A lot like our digital milieu. A lot like To the Wonder.

To those who find Malick's latest "puzzling," I say: look a little closer - think a little harder. Such a suggestion is not to state my own "mastery" of the material, but to call bullshit on the pathetic, snarky responses Malick has been receiving throughout his career, from vantage points high and low. For his last three films (including The New World (2005) and The Tree of Life (2011)), Terrence Malick has been archiving images. Some resplendent, others sublime, yet others melancholy, Malick is the quintessential maître des cérémonies for the post-cinematic age. He envisions livelihood with digital logic, informed by impression and continual reformation, as is consistent with the ethos of living in an ubiquitous media age. Shockingly, none of the reviews mentioned above note the film's opening shots, which are from the smartphone of Neil (Ben Affleck), whose role as disaffected metteur-en-scene is immediately established through these opening scenes. In fact, the shot of Neil, holding beloved Marina (Olga Kurylenko) as they see themselves through the mirror-image projected by a train window, is not discordant with scenes from Paranormal Activity (2009), in which Micah films himself and girlfriend Katie in front of a  bathroom mirror. Contemporary spaces allow for the immediate identification of self - at least the outward self - which will be contrasted by the film's pastoral imaging, in which Malick implicitly asks whether the image of memory (no matter how charged with affect), can ever be capable of matching spiritual presence. To initiate this line of discourse, Malick continues to prefer imaging that refutes much sense of spatio-temporal continuity.

In To the Wonder's spiritual estimation, sensual contact with the Divine cannot be made through logical, causal procedure, but by more transcendental methods - namely an interaction with nature and the pastoral. Malick acknowledges these qualities not by engaging in self-parody, but continuing his investment in these endeavors, this time (and for the first time), seeking answers in a contemporary setting, for a contemporary setting. Images are supplied not as resolutions for narrative mobility, but aesthetic evaluation for cultural context. If one thinks of To the Wonder as a film of spaces constantly in shift and motion, the interest in contrast between rural and urban becomes readily apparent, not unlike the tensions in The Tree of Life, but more directly juxtaposed here.

The outdoor/indoor suburban spaces are either lit with artificial light or pervaded with technological suggestions, the "cleanliness" of lawns and grocery stores the equivalent of Malick's binary codes, which speak as images, rather than for images. All of this supports the idea of a spiritual crisis, which remains at the film's core throughout. In fact, it seems to be the only quality that critics can take notice of, as their guesses at thematic relevance are limited to the most outward postures the film offers. When looking more carefully, these binary tensions are consistently complicated by the difficult nature of Malick's imaging - that is, to try and interpret his filmmaking for what it represents (why one image follows another and context between those successive images) will frustrate a normative approach to viewer reception.Nevertheless, the mise-en-scene remains a vital component in terms of specifically what Malick archives, as his camera drifts away from his subjects and towards a more object-oriented frame. Modernity's intrusiveness has been felt even in more pastoral settings, but now, the digital age, refracting tradition and eliminating space, changes subject/object orientation, which Malick's use of the medium consistently grapples with.