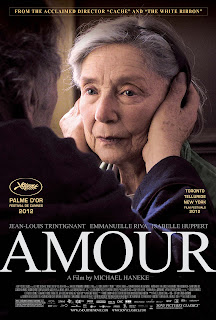 With a film like Amour, an aueurist lens is absolutely essential. In order to locate the depths of what director Michael Haneke is up to, one must have, at least, a working knowledge of his previous films. How so, one might ask? Shouldn't the film, regardless of its filmmaker, enunciate its thematic views in a hermetic space, without necessitating recourse to other works? In essence - doesn't the film speak for itself? Well - yes and no. I point to these initial questions because I suspect a bulk of the praise for Amour (Five Academy Award nominations being the primary question mark) stems from a gross misreading of the film. At least, it stems from a rather simplistic, straight-forward understanding of Haneke's discursive and aesthetic aims. They see, it seems, a heart-wrenching drama about an old couple's love and both of their deterioration - one physically, the other emotionally. What likely goes unrecognized, however, is Haneke's ongoing obsession with bourgeois privilege, which here takes a more implicit role - a move which makes Amour one of Haneke's most fascinating films. If in Cache (2005) there are post-colonial ghosts - which take the form of cameras - in Amour, there are post-bourgeois ghosts, which take the form of the bourgeois, themselves.

Early scenes are pure Haneke; the prologue features the discovery of a dead body, which is immediately juxtaposed with the film's title. Immediately, Haneke is asking to view the film in an ironic way, where amour is being questioned, rather than asserted. Herein lies a central misreading of the film - the significance of its title, which I will return to in a moment. Following the title sequence, a large crowd hustles into a concert hall, the camera facing the audience. Amongst the crowd are Georges (Jean-Louis Trintignant) and Anne (Emmanuelle Riva), whose presence remains obscured by the haute bourgeois decor and faces. And yet - there they are, able to be seen (on a first viewing, only by keen eyes familiar with the actors), but deprived of their individuality, not least because of Haneke's long shot/take aesthetics, which will continue inside the couple's apartment.

These aesthetic interests are essential to understanding Haneke's irony - a film that, in its most fundamental, ontological state, questions the medium's capacity for empathy and existential expression. Amour is something of a ruse - it is not interested in Bazinian realism (a quasi-verite/narrative explication of old-age love), but the undermining of such purported aspirations - and bourgeois viewer expectation - that accompanies such a drab title and minimalist narrative construct. Detached from Anne's prolonged suffering but, like with The White Ribbon (2009) Time of the Wolf (2003), fully attuned to the pain and suffering, Haneke shatters all possibilities for catharsis - voyeuristic or visceral fulfillment through witnessing the pain of others. There will be no growth, no revelation, not spiritual reification - only the inverse: a negation of humanistic pretense, to reveal the underlying superficiality of all intellectual constructs - both social and philosophical - to push further towards revealing, and reckoning, death as the only form of universal suffering. In Amour, there is no "love" to be felt - no infused altruism to revel in - which aligns the film with Funny Games (1997) for its utter refusal to ritualize itself (although, thankfully, there is no breaking the fourth wall in Amour) and Cache for an underlying masochistic pleasure in seeing the bourgeois couple receive their comeuppance.

Thus, Amour is one of Haneke's most enigmatic films since its detachedness rarely slides into outright ridicule - its stabs are much more subtle and understated. Nevertheless, Haneke's puppeteer masochism remains intact - an alternative title could have easily been Suffer, Bitch, Suffer, since the duration is outwardly devoted to Anne's inevitable decline and insignificance. Nevertheless - Emmanuelle Riva's staggering, utterly humanizing performance counters these aims. Her presence and, when she receive close-ups, Balazsian humanity are in competition with Haneke's class-based disgust, in a way that have yet to take such a tangible discursive demeanor in his entire oeuvre. The same goes for Jean-Louis Trintignant, whose interactions throughout the film essentially take place between three women - his wife, daughter, and an indignant nurse (oh, and a (symbolic!!!) pigeon). Therefore, the aims of actors (humanism) compete with the aims of the director (misanthropy). These characterizations are not meant to be absolutes (in no way am I suggesting Haneke's aesthetics are simplistically misanthropic), but by placing these fundamental principles in conflict with one another, Amour simultaneously engages diegetic and metatextual expression. By adding an explicitly oneiric subjectivity to Georges (established and reaffirmed in a few key scenes throughout), a textured ambiguity manifests, which further complicates Haneke's representative foundations. If Amour amounts to something of a synthesis and a departure for Haneke, that hybridity exists because of the film's purity of expression, still dictated by the director's ruling eye and proclivities, but informed and filtered through humanity at its end, rather than just the former. If Haneke sometimes puts the cart before the horse, not here - the result is likely the best film of 2012.
Posted by Clayton Dillard at 8:59 AM