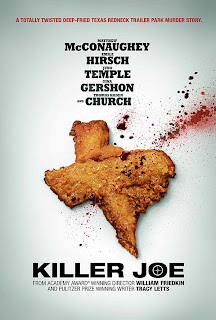 William Friedkin hasn't softened with old age; if anything, he's become harder, more sour, and even less reserved (which is impressive given his Cruising (1980) and To Live and Die in LA (1985), two of the most uncompromising American films of the 1980's). At least, such conclusions could easily be reached by the 77 year-old director's Killer Joe - perhaps the most perverse, audacious American comedy since Paul Bartel's Eating Raoul (1982). If Bartel targets the hypocrisy of "liberated" swingers (and, by extension, the potential insincerity of social revolution), Friedkin uses a screenplay by Tracy Letts, adapted from his own 1993 play, to target pulpy, lascivious Americana - that is, he offers a critique of spectatorial desire to revel in lower-class struggle, hardcore violence, and sexual humiliation. Killer Joe contains all of these, en masse. However, Friedkin's brazen disregard for "good taste" (a pun that will become all the more apparent after seeing the film) and consistent attention to gaze, line of sight, and stunted "vision" (in terms of spectatorship) offer nuanced, carefully composed sequences of squalor that are considerably more sophisticated and thoughtful than your average "red dirt" noir.

Killer Joe and Eating Raoul align nicely (these two on a double bill might light a theater on fire), since each uses caricature and stereotype as a means for prodding and further dissembling the line between high and low art. Though these lines have been consistently blurred for at least the last sixty years, Killer Joe makes use of explicit content in new ways. The narrative will sound trite because it is - that's the point: Chris Smith (Emile Hirsch) owes big-time money to Dallas drug dealers. His father Ansel (Thomas Haden Church) offers little help - he's an unemployed "fuck-up" that has trouble staying in conversations about what to eat for dinner. None the wiser is Sharla (Gina Gershon), a hot trailer-trash mess if there ever was. Finally, there's virginal Dottie (Juno Temple), perhaps the film's key character, if only for how she makes the men around her behave/react. Chris concocts a plan to kill his real mom (never seen in the film) and solicits the help of Joe (Matthew McConaughey), a Dallas police detective who moonlights as a contract killer. Chris hopes the indemnity money will cover his debts - naturally, things don't quite work out.

Friedkin chooses not to shy away from more lurid sequences and lines of dialogue; the film's final third, in particular, will draw ire from viewers who condemn both its violence against women and seeming disregard for the images shown. Rather than jumping to knee-jerk assumptions, however, consider the implications of Friedkin's film, in its entirety. A scene early in the film has Chris and Ansel go to a strip club, to discuss their plans. Friedkin shoots with deep focus, but uses color to flatten the space, rather than expand it. Spaces are consistently defined by their visual contradictions. When the two look up to see a woman dancing above them, it's but a passing glance, devoid of affect. In Killer Joe, even aggressive behavior is rather passive, and lacking in absolute intention. Ansel becomes a running gag, simply for his irresoluteness. Sharla has agency, but only insofar as her sexuality - just like Dottie, whose "purity" becomes a point of fascination - then absurdity - then insanity - for Joe, as his sullied line of work is satirically revived by Temple's blond "angel." Essentially, Friedkin is calling for a reckoning of exploitation - as a filmmaker, his career has often hinged on genre thrills and archetype as a means for unearthing his distinctly paranoid fears of bodily deformation. When Joe says, "you insult me again, and I'll cut your face off and wear it over my own," it summarizes Friedkin's plight - he isn't hiding behind a genre, its ethos - he's peeling off the skin, its corporeal presence sutured over his grimy, outlandish - hilarious - determinism.
Posted by Clayton Dillard at 6:26 PM