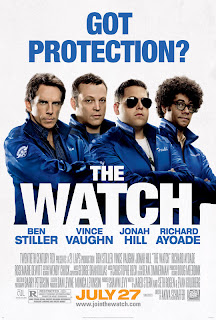 It isn't very difficult to assign a grade to The Watch - it's awful. In fact, while watching this half-improvised, half-ineptly scripted disaster unfold, the experience turns from mounting indifference to, when Franklin (Jonah Hill) flips over his mattress to reveal an arsenal of semi-automatic weaponry beneath, tangible hatred - you want to choke any fleeting life out of this thing, bury it in the backyard and, primarily for the sake of those involved, hope others either never find it or, even better, forget it existed in the first place.

Forgetting isn't hard, in this case. The four leads (they're even unfunny on the poster) are a group of non-human, screenplay concoctions. Each has traits that are supposed to make them "characters," but these are simply place-markers for the comedians to riff. Evan (Ben Stiller) is an uptight Costco manager (impotent too...no really, he's shooting blanks with wife Abby (Rosemarie DeWitt)) who, after a weird Latino stereotype (or "security guard" as the script likely said) is murdered, desperately forms a "neighborhood watch" (the film's original title, changed after the Trayvon Martin slaying) to combat the city's assailants. All he can attract are loud-mouthed, potentially sociopathic Bob (Vince Vaughn), the surely psychopathic Franklin, and Jamarcus (Richard Ayoade), who sees the neighborhood watch as a way to score blow-jobs from Asian houswives. FUNNY RIGHT?!?!?

No. Even less so, once it becomes apparent just how tone-deaf and inept director Akiva Schaffer is at orchestrating comedic rhythm, a succession of gags, or even holding a damn shot - The Watch struggles on elemental filmmaking levels, much less actually being funny. Its pathetic attempts essentially involve Bob and Franklin shooting-off at the mouth, mostly one-liners that are completely outside the parameters of the film, while Stiller's straight-man plays goof and stands staring at the weirdos. Yet, Schaffer can't even handle simple shot/reverse shot compositions, often confusing the space with his jumbled, utterly non-cincematic framing. Then, there's the film's finale in which the neighborhood watch actually have their ridiculous suspicions validated (there are aliens roaming - wait - seriously?), while enacting a bit of macho comeuppance that involves proving who has a bigger dick (every male in the film is compensating in some way for anatomical deficiencies), who can fire the most rounds, and who can turn arrogant town cop Sgt. Bressman (Will Forte) into a quivering coward. Having succeeded at all, the neighborhood watch struts off, ready to apply their newfound masculinity. Any filmgoer will slog out, depressed for a few hours, perhaps even a day or two, at the rapidly deteriorating state of mainstream, American comedies.
Posted by Clayton Dillard at 6:00 AM