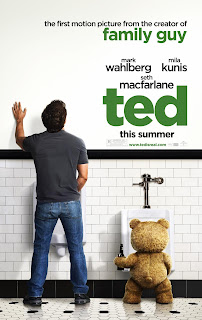 While watching Ted, a viewer is sure to be torn between two inclinations; the first, how funny Seth MacFarlane's directorial debut often is - the second, how undeniably disposable and ephemeral his comedy renders itself. Anyone who isn't actively familiar with Family Guy (MacFarlane's smash-hit television series) is likely to see Ted and believe they are seeing an audacious, associative, even intellectual montage-like collision of ideas/concepts. For those unfamiliar, Family Guy operates under "remember when" logic, often vacillating between past and present to irrelevant non-sequiturs (for instance, lead character Peter fighting a Ronald McDonald size chicken, often for five-six minutes at a time) as a way to invoke/appeal to cultural referents. Thus, it's no surprise that Ted sees the world in an extremely similar manner - one where defining characteristics are pop cultural knowledge, sexual appetite, and not whether you smoke pot - but how often you smoke.

Carrying the baton for arrested development even further, MacFarlane takes John (Mark Wahlberg), an almost forty (!) used car salesman that still enjoys palling around and taking bong rips with Ted (Seth MacFarlane), a pint-sized, talking teddy bear that has been John's BFF since childhood, to half-heartedly explore the tug-and-pull between adulthood and adolescence. Problem is, serious girlfriend (and wasted presence) Lori (Mila Kunis) wants to put a ring on it - of course John, with his continued proclivity for blowing life opportunities, isn't sure if he's ready to make the commit. None of this is enacted with much conviction - rather, an excuse to make allusions to Airplane (1980), innumerable pop cultural figures (that predictably run an eclectic gamut from Norah Jones to Tom Skerritt) and even has Flash Gordon's Sam Jones show up for a good, old-fashioned coke binge. Chuckle-worthy stuff, certainly, just as the prolonged, hotel-room smackdown between John and Ted earns its laughs. Nevertheless - outside of the moment (composition-wise, MacFarlane does little), where does Ted's resonance lie? Obviously, it struck a major chord with audiences and, to this point, is the highest grossing comedy of 2012. Beyond the box office tally, however, where will Ted be in a decade? Two? Much like the films of Judd Apatow, Ted's absolute concern with pop cultural past and present, rather than fine-tuning a comedic mechanism, surely signals its long term insignificance - as forgettable as an SNL "Weekend Update" from December 6, 1980 - the weekend of Flash Gordon's release.
Posted by Clayton Dillard at 6:46 AM