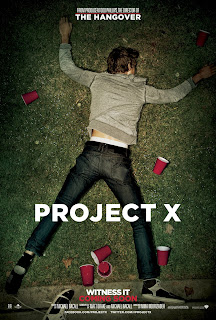 The Hangover is one of the most offensive comedies of the last decade. Project X isn't - in fact, it is precise in acknowledging the inevitable drive towards self-destruction as a rite of passage faced by teenagers living in a post-Gen X, digitized America. These differences are surprising since Todd Phillips has a hand in both (with the former, he directs, with the latter, he produces), but director Nima Nourizadeh recognizes the difference between minors who haven't yet been confronted with societal responsibility and man-children who relish their refused initiation into the social order (not to mention their sexist, homophobic, white-privilege behavior).

Three high school seniors (Thomas Mann, Oliver Cooper, and Jonathan Daniel) throw a house party that degenerates into a series of felonies - each one more flagrant than the last. When the parents are away, this generation doesn't just play - it turns short-lived autonomy into the pursuit of booze, drugs, and bass-heavy music as a means to enact violent frustrations. If Nourizadeh lacks interest in levying knee-jerk admonishment to these pursuits (and, with good reason) it's because Project X possesses an affable understanding of the constraints imposed upon media inundated youngsters. The electronic music calls. The lure of sex (for both boys and girls) supersedes rational counter-arguments. Primal more that perennial, these ephemeral pleasures must be had (and unfettered) in order to progress. As the cultural expectation for adulthood recedes (the average American male now marries at twenty-nine years old), then the image of a teenager lying face-down, drunk, potentially unconscious, straddles that retreat. Don't hate.
Posted by Clayton Dillard at 12:56 PM