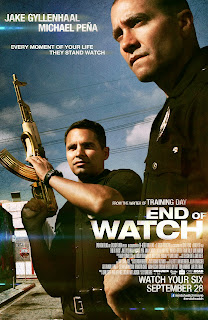 I normally assign grades to films in order to give readers an immediate indication of quality; the grade speaks to the tone and aims in the content of the review to follow. As with anything in an internet age, brevity is desired and essential. Readers peruse Rotten Tomatoes not to digest full reviews, but to see the verdict: rotten or fresh (and maybe read the pull quote, if the reviewer is lucky). However, in some cases, a grade cannot speak to the complexity contained within a given film - it cannot coordinate into a single letter the merits seen over a two hour duration (in fact, grades can never do that, which is why a review necessarily follows). Such is the case with David Ayer's third film, End of Watch. It is insane. And, in this case, rather than allowing my grade (which will be negative) to provide preconceived notions for readers who may be interested in seeing the film, I will ask that you bear with me and read on to understand the situation.


To begin, it is clear that David Ayer has been taking copious notes over the last seven years. Since his screenplay for Training Day (2001) and his impressive directorial debut Harsh Times (2005), Ayer has been thinking about his cinematic craft. At least, he has been thinking his craft through other filmmakers. He appropriates the gonzo Los Angeles mania from Mark Neveldine and Brian Taylor's Crank (2006) and Crank: High Voltage (2009). In addition, he is clearly obsessed with the existential wasteland of Michael Mann's Miami Vice (2006). With the dash-cams/surveillance footage (which even have a time count in the corner), he shows reverence to the structural pursuits of Paranormal Activity 2 (Tod Williams, 2009). And, in having Jake Gyllenhaal's Brian Taylor (make note of the duplicate name with Crank's co-director) be an aspiring filmmaker, documenting he and partner Mike Zavala's (Michael Peńa) daily South Central duties, it immediately recalls the USC-bound soldier from Brian De Palma's Redacted (2007). Thus, having solidified these concrete reference points, we can now begin to see how/why they may be used.

End of Watch aspires to synthesize its titular concern - visual presentation/looking - with Ayer's chosen textual modus operandi: the Los Angeles Police Department. Coming off the generic, disappointing Street Kings (2008), Ayer substitutes a more classical continuity style for mixtures of hand-held, security cam, quick-zooms, and random switches to black and white (a potential pun on the slang for a police car). In mixing forms, he immediately invites a discussion - a reconciliation - of this switch. Herein lies the first problem with grading End of Watch: I believe Ayer's experiments, almost comprehensively, fail. Yet, how does one evaluate quality in the face of ambition? Would it be "better" if he had retained a more standard visual form? Would that improve the film? Maybe - but one must be grateful that Ayer hasn't simply phoned in another routine cop drama. Having said that, Ayer hasn't just thrown caution to the wind - he's lofted it into a hurricane, since End of Watch displays little to no restraint, whatsoever.

That lack of restraint enables a palpable sense of danger - Los Angeles is a place/land where morality and rationality no longer function. Gang members reside on every street corner. In the opening scene, the dash-cam watches a high speed pursuit, resulting in Taylor and Zavala popping out of the car and returning fire on two unloading hoods. Later in the film, Taylor is asked why he didn't shoot a felon who was beating on a cop. He responds: "I didn't feel like killing anyone today." In Ayer's milieu, death and murder are daily occurrences.

However, Ayer adopts a fast-paced, caricature mold to explicate these dangers. Herein lies the second problem with grading End of Watch: the film's intentional usage of caricature/ethnic stereotyping is being used not matter-of-factly, but as an aesthetic choice to appeal against (or refute) its more cartoonish counterpart: Crank. Those who read this blog will know my affinity for Neveldine/Taylor, the Crank's especially. They are intricate, sophisticated examinations of cultural semiotics - their gonzo, satirical A.D.D. form implicitly critiques consumption, over-stimulation, and compulsory pop addiction. However, they do so not with a rigid ploy towards being taken "seriously"; rather, their film refutes these more bourgeois qualifications for proper "taste" and reside in the realm of digital surrealism - a "trash" culture carnivalesque.

End of Watch wants to be taken seriously, clearly; it views humor and laughter as a means to humanize Taylor and Zavala, who drive around, swapping stories, pulling pranks, and trying to maintain a degree of sanity. But, beyond the diegetic laughter, Ayer has no real sense of humor about his project. These aims could be forgiven, but for one critical flaw - his efforts are utterly risible, wavering in conviction, and completely unearned. These failures are best seen in the interaction of the film's various gangs, especially the Latinos, lead by a leering, nonsense character named Big Evil (Maurice Compte), whose exchanges with gang members consist primarily of "fuck you," "fuck you puta," "fuck you cabron," "fuck you essay," "we got this fucking shit," "fuck that!" and "where the fuck are those pigs?" (it should come as no surprise that Christian Spotlight labels the film with a "moral rating" of "very offensive"). I use that ridiculous rating not as an agreement, but to demonstrate how reductive (and virtually absent) Ayer's consideration of on-screen violence is in End of Watch. To be sure - the violence is exhilarating and aestheticized so much (Ayer even resorts to first-person shooter in the film's second half), that it calls into question what Ayer is even doing with his film. If he's not out to use morality, family, and camaraderie as a critique of glorified violence, then what, exactly, is he up to?

Herein lies the third (and final) problem with grading End of Watch: it's an incredible, often exhilarating film to behold. Ayer has tapped into a certain degree of ecstatic macho brooding, gunplay, ethnic stereotyping, and unwieldy visual presentation, which switches logic sometimes two or three times within a scene, that the outpouring of effort overwhelms - it, in some ways, defies the more rational, causal reasons I would like to dismiss the film. Even on a more basic level, Jake Gyllenhaal and Michael Peńa are absolutely compelling, both individually and together. They sell their roles in ways most cop slogs don't and/or can't (see the previous Street Kings, for example). Nevertheless, the perverse joys the film affords are undermined by its own confusion and, consistently, inanity. The film doesn't make a lick of sense. Ayer opts for literal content to visual transition - if the film's Los Angeles is in chaos, so is Ayer's style. Such is not the case with Crank, where seeming stylistic chaos actually has a profoundly rooted, textual orientation. Thus - we arrive at the film's overall failure to cohere - indeed, End of Watch is incoherent. My grade, finally, would be a C-. But don't let that stop you from buying a ticket, sitting in the theater with mouth agape, and wowed by the lengths Ayer is willing to go in order to show, in the words of Big Evil: "he just doesn't give a fuck."
Posted by Clayton Dillard at 5:06 PM