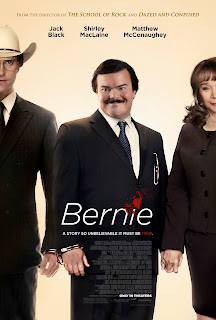 Shades of Christopher Guest and Errol Morris abound in Richard Linklater's Bernie, a true-crime comedy that is less about pathology than gently prodding the constraints that inform and define small-town USA. Linklater hasn't been this funny since Dazed & Confused, nor has his filmmaking been so in-tune with the material, here co-scripted by Linklater and Skip Hollandsworth, who wrote the newspaper article which serves as the film's basis. From the opening scene, where mortician Bernie Tiede (Jack Black) carefully explains the procedure for presenting a corpse during an open casket funeral, Linklater maintains comedic balance. He is less derisive of his characters and more loving, empathetic; residents of the small Texas town comprise Linklater's testimonial approach - several of which are so convincing (Rick Dial as Bernie's superior, in particular), it's hard to believe we're watching trained actors, and not residents plucked from their homes.

Moreover, Bernie impresses because its narrative convincingly grows in complexity, and does so without resorting to stand-alone set-pieces. Bernie's relationship with wealthy widow Marjorie Nugent (Shirley MacLaine) is layered through the testimonials, which simultaneously further the complexities of their relationship, while questioning how reliable any of these testimonies can be, given they are, surely, gossip, rumor, and speculation. Therein lies the bulk of Linklater's success - he lets the characters speak for themselves, since he isn't as concerned with shaping a polemic against conservative values as he is allowing an organic reveal of gullibility when faced with primal matters. Bernie is said to have committed "a crime of passion," but the town's religious acceptance and passivity embody the opposite of passion - dogmatism - as their pat, succinct, but ultimately confused (they just can't understand how Bernie would do such a thing) insights yield little, empirical information.

A mid-point entrance by lawyer Danny Buck (Matthew McConaughey) helps solidify these themes, though we should applaud Linklater for sticking to his guns, so to speak, and refusing to psychoanalyze Bernie, though the residents indirectly speculate, since any such desired endpoints would undermine the film's overall success as a witty, concise bit of business, as it contemplates the often inextricable social conduct tied to a given geographical setting. Less "slice-of-life" than "slice-of-lies," Linklater asks where truth ends and begins,  how performance and sincerity have become one-and-the-same.
Posted by Clayton Dillard at 10:23 AM