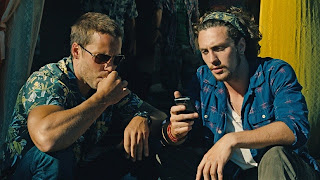 The Amazing Spider-Man began the holiday box office with something of a bang, netting an estimated 35 million on Tuesday (7.5 million from midnights) and looks to be headed towards a 65 million weekend and a 140 million 6-day. That's significantly better than early tracking and enthusiasm would have lead one to believe, as the film appears to be playing very well in smaller, family-driven markets, where the film is likely to be even stronger than The Dark Knight Rises - just 16 days away.

While Spidey will certainly dominate the July 4th holiday weekend, two other films open to give it some company, both of which are arguably more worthy of one's attention than the webslinger's relatively insignificant reboot (review forthcoming). The most significant is Oliver Stone's return to Natural Born Killers and U-Turn territory with Savages, a fast-paced, uber-violent saga of pot dealers, corrupt federal agents, and Blake Lively. The other (and considerably less deserving of anticipation) is Katy Perry: Part of Me (insert pun here), a cartoonish, 3D musical/concert film that's likely to bring out KP's fans in droves (but not much more). Both films aren't looking too good at this point. As expected, neither has cracked the Fandango Top 5 and general awareness (or certainly, interest) appears to be lacking in the face of the bigger, faster, stronger franchised, marketing machine titan that is Marvel. Stone's revival of his signature gonzo style should be cause for widespread celebration this weekend, but Savages is far too violent, gritty, and assaultive for anyone other than the adventurous viewer. It pains me to say it, but Savages will likely have a sub-10 million weekend. Opening a day earlier, Katy Perry should burn some significant portion of its 4-day haul on Thursday, likely with 4-5 million, headed for about a 10 million weekend. Things cool off this summer for a couple weeks (Ice Age 4 is the sole remaining wide release) until the July 19th midnights of The Dark Knight Rises, where all box office hell (or is it heaven?) will break loose.

Posted by Clayton Dillard at 9:47 AM