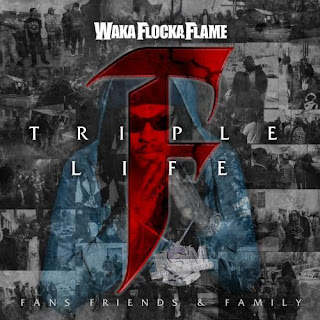 Triple F Life: Fans, Friends, and Family, Waka Flocka Flame's follow-up album to Flockaveli (a speaker-blasting masterpiece) is less an extension of the rapper's initial efforts, than a stumbling degeneration into unlistenable, commercial pop-rock-rap. At least, that could best describe the album's first half. Critics of Waka don't seem to get what makes him special and, on his studio recordings, one of the best bass-heavy, minimalist rappers around. His music is not meant for thematic dissection or lyrical poignancy. Instead, his music is meant to be heard, felt - Waka is about cadence, repetition, and ambiance. In a sense, he is Rap's equivalent of Trance - lean, mean, hard - when he's at his best, anyway. His best can be seen on Flockaveli tracks like "Hard in Da Paint," "Bang," "Fuck da Club Up," and "Grove Street Party." Waka is about a mindset, a tone, rather than being "real hip-hop," whatever that means. His "crunk" origins are elevated by his raspy, deep voice, which makes even the most risible lyrics (“Pay for what girl?/You better pay for this dick”) sound reasonable.

Thus, it's troublesome to see Waka get tripped up on tracks featuring Drake, Trey Songz, Tyga, Flo Rida, Nicki Minaj, and B.O.B - folks who don't belong anywhere near the "down-south gutter music" Waka has established himself on. Luckily, wading through the commercial trappings, the second half of Triple F gives Waka his footing, from "Cash" until the surprisingly eloquent (well, for Waka anyway) Outro, all of them immersive, streamlined, sonic bangers. It's unfortunate Waka decided to leave off "Foreign Shit," and bonus tracks like "Inky," which does not appear on the released album, much to my chagrin. Not to mention the phantom collab with Tyler the Creator, which would have been titled "Faggot." With those three tracks added and the subtraction of "Round of Applause," "Get Low," "Fist Pump," and "Candy Paint and Gold Teeth" - Triple F would be an outstanding successor to Waka's focused, unwavering debut. As a venture towards more commercial terrain, Waka seems of two minds about his future, and it shows, as the aforementioned tracks almost sink the album. Below are my notes/thoughts on individual tracks:

2.            Let Them Guns Blam
“Let them Things Blam.” “I go Kanye/Jay-Z ham.” Dark, repetitive, the hip-hop equivalent of Trance. Not so much what he says, as how he says it. Waka is scary, “Friends turned to enemies/enemies turned to friends/eat you like some busy-bees/kill you and your best friend.” Speaker-banger, akin to “Hard in da Paint.” 5/5

3.            Round of Applause
Starts with a burp. Sums it up pretty well. Album’s most commercial track – Waka becoming more commercial, going over into pop/R&B rather than straight “down-south gutter music.” A very silly song. 2/5

4.            I Don’t Really Care
A better mix of Waka style and hip-hop, harder than it is commercial. The album didn’t need both this and "Round of Applause" and this one is preferable to maintaining sinister overtones. 3/5

5.            Rooster in My Rari
“Pay for what girl?/You better pay for this dick.” Waka’s chaotic, reckless style on display here, though less metered than some of Flockaveli’s better examples. 3/5

6.            Get Low
Eww. What is a track like this doing on a Waka CD? These pandering attempts to cross-over and become more pop/commercial are embarrassingly transparent and an insult to those Waka fans that understand Flockaveli’s brilliance. Tyga and Nicki Minaj have no place on a Waka album. 1/5

7.            Fist Pump
“See my life is like a movie…action.” Too many songs about getting drunk in da club, rather than intimidating fantasy tracks about young male aggression, in the form of minimalist hooks and beats. Even some guitar here at the end. A mess, hodgepodge. 2/5

10.          Lurkin
“Brrrrrat!” Like Cash, this is what Waka fans want to hear. An impressive encapsulation of not just the track’s title, but the menacing ambient supplements that back Waka’s shout/rap style. As such, these best Waka tracks attain a 360 degree space, where it seems like the music, noises, and voices are coming from front-back-side-to-side. A paranoid, bangin’ classic. 5/5

11.          Clap
Dark, scary, silly. Waka’s horror story – just listen to the creepy hook/beat. Fits nicely with "Break Her" from Ferrari Boyz. One of the best tracks Waka has ever released. 5/5

13.          Power of My Pen
A hilarious song – if only because Waka doesn’t realize it is his voice and cadence – not his pen – that has made him a millionaire. Sounds pretty dope though. 3/5