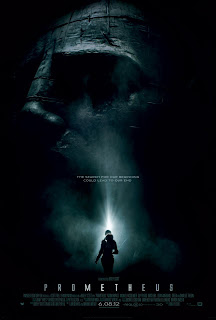 Prometheus is the defining film of Ridley Scott's career - at least, it can be seen as a microcosm for the director's wildly hit-and-miss oeuvre, which extends from seminal sci-fi like Alien and Blade Runner, to bombastic yawns Gladiator or Kingdom of Heaven, and finally outright laughers, such as American Gangster and Thelma & Louise. Prometheus is, indeed, all three - seminal, bombastic, laughable, a high-and-low session of aesthetic wonder, opportunities squandered, and a narrative that vacillates between compelling and inert. In aiming to achieve many things, with his return to the film which essentially put him on the proverbial filmic map, rather than hone in on one, Scott comes up with much to chew on, though it often tastes like goop rather than a congealed, well-formed entity. Blame this on Scott, first and foremost, since his serio-pretentious style (brooding characters, darkly lit mise-en-scene, mostly humorless) is only productive when he has material to match - he is not a satirical filmmaker, making it more difficult to cut Prometheus much slack - at this point in his career, Scott doesn't deserve any.

Not to beleaguer the point, but Prometheus tugs in-and-against itself throughout the duration of its fairly brisk 124 minute runtime. Beginning with a credit montage that revels in the sublime and nature, Scott ends on a well-built, perfect specimen of a man - though it's uncertain whether this figure is human or some sort of extraterrestrial. Eating what appear to be pills or rocks (the slapdashery has begun), the man chokes, disintegrates, and falls into a river. Queue the film's title, which then cuts to an archeological dig, where scientists Elizabeth Shaw (Noomi Rapace) and Charlie Holloway (Logan Marshall-Green) have discovered "not a map - an invitation," that commences the titular ship's journey to uncover the origins of not just the "invitation," but potentially mankind itself - the crew believes they will find "engineers," aka the beings responsible for human creation. Along for the ride are resident cyborg David (Michael Fassbender), wise-cracking pilot Janek (Idris Elba), Mission Director Vickers (Charlize Theron), and another half dozen crew members who serve no purpose in the film other than to be killed-off (which, even at that, Prometheus struggles to cleverly deliver).

What follows is, more-or-less, Alien, certainly with some alterations and deviations, but the end result being essentially the same (at least, in narrative terms). Scott stages two or three marvelous set-pieces, the best of which involves Shaw and an advanced piece of machinery that can, within minutes, perform any surgery needed, on command. These ten minutes, from the set-up, to the reveal of exactly what necessarily has to happen in order for her to make it, is masterful on the level of genre thrills, taking a short premise and fulfilling its visual/tension potential. Likewise, the deceitful activities of David, helped by a brilliantly slimy and Hal-9000-esque Fassbender, intimate something deeper and looming - a promise the film never fulfills. Moreover - most disappointing is the flippant integration of discourse on Creationism vs. Darwinism, which Scott generally treats as mere filler for propelling the crew's inevitable descent into death, destruction, and mayhem.

Deft touches sporadically elevate the film; Scott's introduction to the ship comes via David maintaining the comatose crew and keeping himself occupied by watching films, like Lawrence of Arabia. "The trick is not minding that it hurts," is the famous O'Toole line and David seems quite keen on its psychological potential, even if Scott disregards these themes as soon as they've been established. Likewise, banter between Vickers and Janek is playful (Elba is excellent here), as is the film's deliberate, but never quite languid pacing. The first half of Prometheus gives the sense Scott is taking his time, having some fun, and building towards a funhouse of terror that will viscerally up-the-Alien-ante. Instead, characters are dispatched quickly and with little warning (why even include insignificant crew members if they aren't at least going to get an ingenious offing?) and the final twenty minutes play rushed, bored, and dutiful to the point of being risible. As a deliberate bait-and-switch of expectation, Prometheus is somewhat masterful, though said switch oddly achieves even less than the already middling promise asserted by the film's tense, high-octane trailer (we don't even get the music or the siren from it, just an often limp, majestic score by Marc Streitenfeld).

It's never fitfully clear exactly why the crew has set-off to begin with, and while such details are normally not all that important - well, here it's almost essential, especially since Scott's film should be comprehensively updating/commenting on not just its internal thesis for the origins of mankind but, in many ways, the origin of the contemporary sci-fi/action/horror film, all of which Scott's 1979 original helped to pioneer. Such commentary appears to be lost on Scott and scribes Jon Spaihts and Damon Lindelof, who consistently settle for rote, routine thrills over establishing a series of shocking, dangerous set-pieces. Not much ultimately sets Prometheus apart from many a sci-fi, "monster in the house" film, except for the third act thud of frustration and missed opportunities.


Posted by Clayton Dillard at 9:46 AM