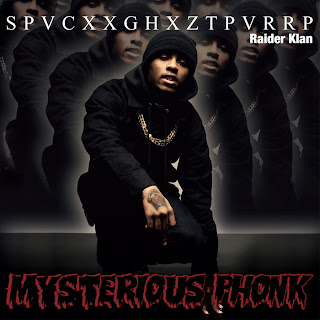 SpaceGhostPurrp is the Apocalypse - not just in his nihilistic, misogynistic, and misanthropic lyrics (which admittedly abound on nearly every track), but through an evocation, sonically, of a waste-land, his beats looping, pinging, and dissipating almost immediately after the bass drops. He is the anti-club jamz, the anti-radio friendly, the anti-R&B - but don't let the string of anti's fool you into thinking the Miami-based rapper's Mysterious Phonk is simply a posturing contrarian. Much like Odd Future (it's not surprising that a future collaboration between the two was just announced today), the rapper's tracks simultaneously embrace a past and present - in SpaceGhostPurrp's case, his influences are heavily and clearly drawn from 90's gangsta rap, but infused with a contemporary ambient ambivalence, making its paranoid (that's even a title for one of the tracks here) foundations all the more frightening and palpable. Beginning with "Mystical Maze," in which Purrp's pessimism pierces with every line ("I always try to smile but the world is fake/the world is a house with a yard full of snakes") and most pungent in "Suck a Dick 2012" and "Get Yah Head Bust," there's never even a momentary diversion from the menacing, demon-filled psyche that Purrp consistently puts on display. In what is undeniably one of the album's most essential tracks, "The Black God" lays down Purrp's unwavering convictions: "I got to have the world in my hands/I'm a God, I'm no longer a black man." Purrp's mix between orchestral intrusions, electronic interludes, and hard drum/bass lines solidify his musical eclecticism and proclivity for varying the means for relating his proposed tyranny. Mysterious Phonk is both a frightening and frighteningly sophisticated debut for a 21-year-old artist who, one senses, hasn't even begun to unleash his true demons, much less the depths of his varied talents.

Posted by Clayton Dillard at 2:45 PM