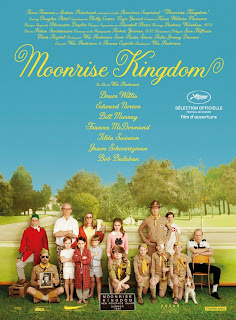 Small-minded viewers are likely to see Moonrise Kingdom and claim that "a lot happens in this film, and not a lot of it matters," or something to that avail, which has often been the knock on Wes Anderson, a master of finding significance in, what I'll call, "The Order of Idiosyncrasy." In his book Wes Anderson: Why His Movies Matter (shockingly, the only book-length analysis available of the prominent auteur), Mark Browning fails to locate what the title promises, often falling back on weak, unsophisticated arguments of tepid critical reception and his films "failing to find [an] audience" rather than getting to the crux of Anderson's internal logic. Perhaps none of Anderson's films better epitomize that logic than Moonrise Kingdom, in some ways an implicit rebuke to critics who find his work overly "naïve, mannered, pretentious and incomprehensible." Call it his Body Double, a film whose self-awareness is tightly sealed within the care, craft, and composure Anderson (like Brian De Palma) insists his films possess, leaving no room for speculation that anything and everything within (and outside) the frame isn't duly accounted for.

To the question of quality: Anderson's worth lies in his rigorous formal interests, which often speak louder and with more proficiency than his troubled, in-arrested development characters. In this sense, Anderson prizes contrapuntal means - efficiently, smoothly navigating the cinematic spatio-temporal matrix that contains figures of disarray. Moonrise Kingdom actively acknowledges this cinematic split (or it will for perceptive viewers) and, as such, is likely Anderson's best film. Significance resides in simultaneous interests, both textual and formal, but with emphasis on the latter as text - while his critics often get hung up on what he speaks, their arguments often neglect to address how he speaks; because of this, these knock remain unconvincing.

The film's opening is an Anderson tour-de-force, a rigorous spatial introduction to the filmmaker's view of youth, love, and kinesis. Anderson is an action filmmaker - there's always beauty in his movement, whether inter or intraframe. Scout Master Ward's (Edward Norton) inaugural breakfast march gets majestic treatment, the tracking and stopping not just a flourish, but inseparable from the social rigor Anderson and co-scribe Roman Coppola's warm, humanist script wishes to reflect. The economy of storytelling is reflected in one of many "Wes-tages," bursts of affected information that would play fetishistic if Anderson didn't consistently imbue them with his thoroughly genuine and meticulous artistry.

Sam (Jared Gilman) has abandoned his Scout troupe to be with Suzy (Kara Hayward), whose parents (Bill Murray, Frances McDormand) recruit the help of Captain Sharp (Bruce Willis) and, eventually, Social Services (Tilda Swinton) to sort the situation out. Anderson wrings profundity from absurdity, the film's best scene his insistence on not shying-away from his protagonists' youthful sexuality. With Bob Balaban as a direct-speaking Narrator, Anderson's filmic DNA recalls Dusan Makavejev and W.R.: Mysteries of the Organism's Carnivalesque aims, its sexuality tied to psychoanalysis, youth, revolution, death, and documentary. Given Anderson's filmography, especially The Life Aquatic with Steve Zissou, there is an inextricable coalescence of personal and political, asking through an intricate assemblage of personalities and personifications (The Fantastic Mr. Fox) what constitutes the brief, fleeting moments life offers, before corporeal deterioration no longer allows such bodily expression  (see also Makavejev's Sweet Movie).

Thus, to answer Owen Glieberman and Rex Reed, the critics to whom the above quotes belong, respectively, everything in Anderson's films matter, even if dogmatic, preconceived notions (Reed) prevent certain viewers from recognizing that Wes Anderson is one of the few cinematic Cowboys remaining, and, in many ways, the voice of his generation. Therefore, I will let Andre Gide say it better than I can: "Great authors are admirable in this respect: in every generation they make for disagreement. Through them we become aware of our differences." While true, one might say the cinema of Wes Anderson is more interested in locating our similarities - perhaps an even more admirable venture.
Posted by Clayton Dillard at 11:34 AM