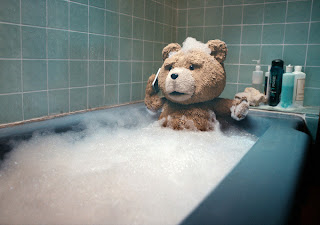 Now that Brave has beaten the strangely lowered forecasts many prognosticators (but not this one) levied its way (it’s too geared towards girls, it’s coming too close on the heels of Madagascar 3, the Scottish accents will throw some viewers off, etc.), it’s time for the adults to take back the cinemas (or, at least, to try). Arguably three (but at least two) heavy-hitter comedies open against one another, all looking to stake out terrain of their own, catering to disparate, if not quite divergent demographics. Of course, we will be looking at Ted, Magic Mike, and Madea’s Witness Protection, as well as the dramedy People Like Us, that’s decided to stick it out on this crowded weekend for reasons unbeknownst to me.

The debate about this weekend has revolved around Ted and Magic Mike, two hard-R comedies, each of which predominately appeals to either men or women, respectively. The former is Family Guy­-creator Seth MacFarlane’s directorial debut – and it’s fairly easy to see that this will be the victor of the new releases. Adult audiences have been craving a raunchy, original hit for months now, as The Dictator and That’s My Boy comprehensively failed to do the trick, especially the latter, with its tired premise and aging star. Ted’s marketing campaign has been outstanding, unveiling a Red-Band trailer that aptly showcases the boundaries MacFarlane is willing to traverse, while highlighting the charisma of leads Mark Wahlberg and Mila Kunis. Moreover, Universal’s immediate decision to move Ted up two weeks following the retreat of G.I. Joe 2 should show the studio’s understandable confidence in their unique, destined-for-success laugher. Given these factors, Ted should open with about 38 million for the weekend.

Many prognosticators believe Magic Mike will be the weekend’s breakout hit, what with the presence of hot-boy Channing Tatum, whose last few films have done absolute gangbusters, and its male-stripper premise, that promises to show more male skin than the entire oeuvre of Sasha Baron Cohen (and that’s saying something). However – before one hastily assumes these factors equate an enormous weekend, a few other factors need to be considered. Magic Mike is essentially an Indie, an art-house entry with a mainstream coating. Sporting a budget of five million bucks and helmed by Indie-wunderkind Steven Soderbergh (whose last two films earned Cinemascores of B- and D+, respectively, despite outstanding critical reviews), there’s cause for concern in terms of both financial viability and, eventually, weak WOM. Of course, the latter won’t affect the opening weekend too strongly, but those expecting a gross in the 30-40 million range are simply premature (pardon the expression) and forgetting one thing – Americans are prudes and often shun nudity-heavy films (especially male). Needless to say, the film will be straight-male kryptonite (at least for the insecure) and will rely heavily on women neglecting their shame and showing up in droves for some beefcake action. Of course, many will, but the expectations shouldn’t go overboard. Magic Mike will likely have a weekend in the 23 million range.

Otherwise, Madea’s Witness Protection is likely to do well, but experience a blow from: the other, higher profile openers, a tiring of the character’s stale antics, and a summer release – Madea’s first. Expect her lowest haul yet, hovering around 18 million from about 2000 theaters – still an impressive number. People Like Us also stakes out 2000 venues, but is unlikely to come anywhere close to Madea’s take. It should fare better than last weekend’s disaster (no pun intended) Seeking a Friend For the End of the World, however. 7 million is likely.

Ted and Brave should stay neck-and-neck for the weekend crown.

Posted by Clayton Dillard at 5:14 PM