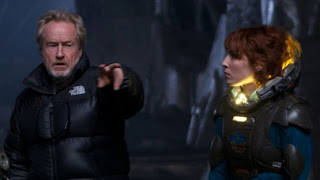 With Snow White and the Huntsman out of the way and starting as a moderate hit (even though it's sure to remain one of the summer's most inert films), it's time to clear the path of discussion for one of  three remaining "event" films - the first being, of course, Prometheus, Ridley Scott's long-awaited prequel to Alien return to science fiction following a two decade absence. Scott's latest is one of the more intriguing box office prospects of summer months, in that it's R rating, heavy sci-fi themes and imagery, plus relatively no-A-lister cast (except for Charlize Theorn, whose box office history is shoddy, to say the least) do not give an immediate sense that Prometheus will be able to pull the same sort of bank usually reserved for summer sci-fi. And yet, the counter-argument has been that it's precisely that peculiarity, the anomaly that sets it apart from the rest, which has been reinforced by a marketing/ad campaign that highlights grandiosity and intensity over narrative progression. In these ways - its box office status remains as enigmatic as the film itself (at least for those who've yet to see it). Certainly - the initiated will come out in droves, likely for midnight or Friday shows, so early signs could be relatively strong/impressive. One wonders, however, if average moviegoers are savvy enough to pick-up on exactly what Prometheus is, the pedigree that it possesses, and the cultural significant implicit in Scott's return to his original, half-masterpiece. 3D and IMAX should help (in fact, IMAX 3D should see many a sellout), but those prognosticators out there flirting with the notion that Prometheus can challenge The Matrix Reloaded's 91.7 million opening, the most ever for an R-rated weekend, are mistaking their own enthusiasm for the rest of North America's. Falling somewhere in-between Fincher's The Girl With the Dragon Tattoo and Nolan's Inception, in terms of overall appeal, Prometheus is more likely to be a word-of-mouth hit, than an opening weekend smash. Opening in 3300 theaters, look for it to snag just over 50 million.

Also opening, though to much less fan fare and anticipation, is Madagascar 3: Europe's Most Wanted, Dreamworks Animation's third entry into their globally successful franchise. While it doesn't appear that anyone has really been clamoring for another go-round with a sarcastic troupe of talking animals, early reviews have been surprisingly enthusiastic, subsiding understandable knee-jerk cynicism that this is just a cash-in, not to mention the kiddie market has been long starved for a break-out hit. Although The Avengers and MIB3 crossed over into kid demographics, really little ones haven't had much of an option since Chimpanzee or Pirates: Band of Misfits, neither of which was a significant hit by any stretch. In fact, you'd have to go all the way back to March 2nd for The Lorax to find a widespread animated hit. A three month layoff is a long time in moviegoing terms and with schools finally releasing across the US, it might be time for the little ones to hit the multiplex. Whether they do it now, or wait two weeks for Pixar's Brave is the bigger question, but this known entity, plus its appearance to be quality product should ensure Madagascar's relevance, if not dominance, this weekend. Look for it to make just a hair under 60 million.


Posted by Clayton Dillard at 8:06 AM