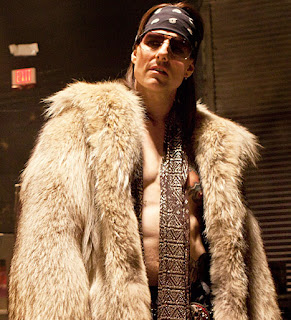 Upon us is perhaps the least interesting box office weekend of the summer. Assulting, insulting, ear-screeching, retina-melting excuses for cinema open across North America, as two of contemporary filmmaking's most prominent villains (Adam Shankman and Adam Sandler) spew their latest concoctions in the faces of masochists willing to pay for such souless, empty exploitation of their sensibilities and wallets. Shame on anyone who goes out and offers their funds to facilitate further projects by these real-world vampires.

Rant over, this Father's Day weekend greets Rock of Ages and That's My Boy, both of which appear, from a distance, to offer moderate box office potential, given the pedigree of their villainous figureheads...respectively. However, upon closer inspection, we can see that each is looking to land in the shitter. Rock of Ages looks to follow the success of Mamma Mia and Hairspray, though one wonders whether 80's hair-bands and Journey covers are something people beyond American Idol freaks are willing to pay for, much less flock out to see on opening weekend. The cast offers some promise, but trailers, promos, and clips look horrendous and reviews are sure to be awful - middling. Look for the musical to open just over 20 million.

Adam Sandler's last three films have scores on Rotten Tomatoes of 3% (Jack and Jill), 19% (Just Go With It), and 10% (Grown Ups). Following the career of Eddie Murphy, Sandler's descent into pathetic kid-fare has undoubtedly produced much ill-will amongst adults towards the once revered comedian (at least for Billy Madison and Happy Gilmore) and his last five or six films, though some have been successful, have reached a tipping point where adults must now choose to go see Sandler's R-rated latest over forthcoming comedies Ted and Magic Mike (unless they are going to see them all). The addition of Andy Samburg is negligible, so it would be surprising to see That's My Boy reach any more than 20 million.


Posted by Clayton Dillard at 1:46 PM