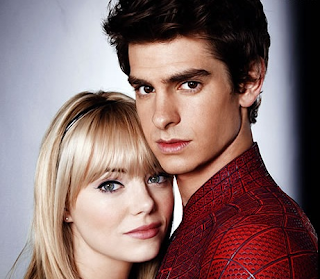 The July 4th weekend starts early this year, with Sony's reboot (and Marc Webb directed) The Amazing Spider-Man hitting North American theaters at midnight, July 3rd. The estimated 215 million dollar budgeted tentpole Blockbuster looks to pick-up where (or, rather, re-up) where Sam Raimi and Tobey Maguire's record-setting franchise left off, casting Andrew Garfield (of The Social Network fame, primarily) as the photographer-turned-web-slinger and Emma Stone as the central love-interest (I feel comfortable in making that assessment being the extent of her role). If the credentials seem a little underwhelming, they should, and thus far, Sony has to be sweating bullets at the early box office indications. Not having cracked the Top 5 on Fandango a mere four-days before release is a potential disaster for a 200+ million venture (also with reports of non-existent midnight sales), especially when the flick has only a short window (roughly 17 days) to make some money before The Dark Knight Rises smashes any-and-all competition in its way. The marketing has focused heavily on the visuals and character arcs - not a bad choice, but with two other superhero juggernauts (the other being The Avengers, of course) book-ending the summer slate, The Amazing Spider-Man seems to be caught between a rock and a hard place. Spidey might get tangled in his own web of irrelevance, especially since the reboot has done little to differentiate itself from Raimi's original. Reviews have been mostly positive (if only modestly so), but many critics are indeed pointing out the sense of deja vu that will inevitably linger over this reboot's head, coming a mere decade later following the first entry. The lowest total haul for a previous entry was Spider-Man 3's 336 million. Webb's version is much more likely to follow the dreaded path of Superman Returns, it would appear, and could struggle to clear 200M total domestic (though it will likely be able to clip that mark).