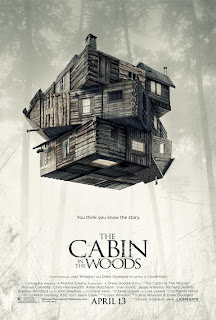 The Cabin in the Woods is creating quite the initial critical stir, suggesting its impact on the slasher subgenre, much like Scream, may be more than marginal. It would be unfortunate if this is so, since Drew Goddard’s film isn’t much of a horror film at all – it doesn’t possess the ethos needed to elicit affect, dread, and active commentary. In fact, unlike Scream and Scream 4 (which, for me, are the subgenre’s only masterpieces since, arguably, New Nightmare (how does Craven do it?)), Goddard and co-writer/hack Joss Whedon display little interest in creating a horror film, beyond their amateurish preoccupation with an inability to emote, to speak, and engage critical discourse on any level except the purely meta, where the text, itself, contains little value beyond a spark-plug for its creators preoccupations with their own perceived cleverness and ingenuity – which, by film’s end, they’ve ultimately displayed relatively little of.

Questions of philosophy (and difference of) begin to get tricky in genre films when there’s an outright rejection of a genre’s implicit premises. The Cabin in the Woods is such a film, indicative of filmmakers who either a) don’t like slasher films (fine) or b) stand in awe of the subgenre, grew up as fans, and want to make a version of their own. Problem is, much like with many unsophisticated filmmakers who wanted to make neo-noirs in the 1970’s and beyond, that simply saw visual style and archetypes rather than the social, spatial rooting of the genre/style within a certain time and place. Goddard and Whedon locate in their film a wealth of cinematic forbearers, ranging from more obvious films (The Evil Dead I and II, Friday the 13th, and Alien) to less obvious, in terms of form (Blood for Dracula, Starship Troopers, Body Double, and The Coen Brothers). Those latter films (all masterpieces in my eyes) actively sought to comment on and, ultimately, critique the films that had preceded them, in each of their respective genres – in the case of something like Blood for Dracula, director Paul Morrissey has openly said he hated horror films, but wanted to make one because it was formally contrapuntal to his neorealist style (which he hoped would make for a bizarre experience). He’s certainly right, it and Flesh for Frankenstein are bizarre and great films, but the latter mainly because Morrissey has such a firm grasp on his vision, his philosophies, and isn’t preoccupied with genre tropes as an end all.

The duo behind The Cabin in the Woods has a lot to learn from a filmmaker like Morrissey, in that they mistake their film, essentially about the failure of past discursive modes to generate meaning (a hackneyed concept which cultural theorists have been tracing out for 30+ years), for something reflexive, self-aware, and meaningful. Their sensibilities are playful – but solipsistic/nihilistic in their almost shocking dismay for narrative as a cultural means of generating meaning. The film cannot be discussed without revealing its central conceit (yes, that’s all it is): in an unknown time and place, a group of five college students (dumb jock Curt (Chris Hemsworth), slutty Jules (Anna Hutchison), nice guy Holden (Jesse Williams), pot-head Marty (Fran Kranz), and virgin (well, almost) Dana (Kristen Connolly)), gather at the titular venue for a weekend of partying/fucking. Unbeknownst to them, their trip is an elaborate set-up, headlined by two, mundane, detached power plant officials (Bradley Whitford and Richard Jenkins), who need the fivesome as sacrifices to appease the gods, whom will spare the Earth from its long-delayed apocalyptic end. Essentially a ritual act that will “keep the really bad demons at bay,” things naturally deteriorate when a couple of the cabin survivors discover the plant is directly adjacent to their manufactured vacation destination, and seek to escape, alive.

Goddard and Whedon take their conceit to obvious levels, such as having Whitford and Jenkins “manipulate” the scenario as it goes, revealing its constructed nature, which, they clearly feel, mirrors their roles as creators, filmmakers, “artists.” Obsessed by their own creative dilemmas, the filmmakers simply lament an inability to speak anything new by making a film that simply reiterates that – they are like the young film student who just discovered Kristeva, Girard, and/or Baudrillard – preoccupied with notions of simulacrum, cinema as ritual, and the abject, these are conscious iterations rather than meaningful, organic applications – The Cabin in the Woods almost plays like an essay film, since it considers “the artist” far more than it does genre, diegesis. Ultimately, little can be culled from the film itself, especially since neither filmmaker is interested in fleshing out the social end of its construct. Much like the abysmal The Hunger Games, Goddard and Whedon merely pay lip service to commerce and late capitalism – it’s mentioned that the events are being recorded and shown to “please the customers,” but any explanation of how the operation actually works, is completely overlooked. Death on video is sold, presumably millions are watching, but there are few ramifications (ethical, or otherwise) ever attributed as to what that actually constitutes. Such is not the case for a film like Gamer, among the most underrated films of the previous decade, in that it eschews normative character preoccupations and/or its own reflexivity (though it certainly is) for a scathing creation of late capital run amok, given excellent detail by Neveldine/Taylor’s Carnivalesque critiques, for which they should now be household names (if there were justice, that is).

If Scream is deconstruction, The Cabin in the Woods is a deconstruction of said deconstruction, a cannibalizing act that negates and undercuts the film at every turn – instead of making assertions, Goddard and Whedon make assertions about how it’s impossible to make assertions. Genre is a discourse, it speaks, it’s a language – so the denial of language, the refutation of culture – in essence, alienation – is the most nihilistic form of discursive practice. I mentioned the Coen Brothers earlier as a potential influence – nearly every one of their films considers and satirizes a loss of communication or, at least, the inability to successfully transmit information, either because of differences political, ideological, or sociological. Make no mistake though – each of their films/characters possess ideas and are generally adamant, thus conflicting once put together. Goddard and Whedon treat their characters like drones – they are the stars of their own film, which cannot be said for the Coens, because they bring such textual and formal mastery to each of their works (the latter certainly can’t be said for Goddard, since The Cabin in the Woods is TV banal through-and-through). There’s a scene somewhat late in the films where Whitford is attempting to articulate the tragedy of their situation – halfway through, he stops, confused, disinterested, and apathetic, not finishing his thought. It parallels the prologue, which ends with Whitford unsuccessfully trying to get Jenkins’ attention – discourse is dead, they’re saying – and like the most amateur of nihilists, they have no solution, thoughts, or, worse yet, affect for their claims. Had the duo made the same film with rigorous formal concern, attempting to assert the death of narrative and aggrandize form (which isn’t a novel idea either), their efforts could have been valiant and worthwhile. Nothing is more risible than when a character named “The Director” (I wish I were joking) shows up (she’s played by Sigourney Weaver) and lays down the “rules” of the ritual, even going so far as to flesh out stock character stereotypes and archetypes. It’s a wonder she doesn’t refer to Dana as the “Final Girl” – a choice which would have easily constituted the funniest (for the wrong reasons) moment in this otherwise dull and painfully obvious (not to mention verging on incompetent), amateurish descent into creative metaphysics gone way, way wrong.
Posted by Clayton Dillard at 9:44 AM No comments: