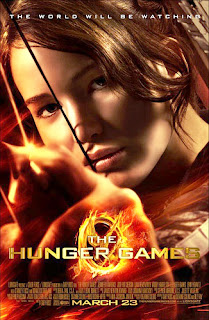 The filmic/aesthetic/textual atrocities within Gary Ross's The Hunger Games are so numerous, it would likely take several encyclopedic volumes, with various disciplines and epistemological foci, to fully explicate. Foundationally, these errors and omissions stem from Ross's complete and utter inability to formulate a perspective and/or point of view on author Suzanne Collins's wildly popular series of books (unread by me). Essentially, Ross envisions a post-apocalyptic milieu where race, queerness, and difference no longer exist. At least, he's so gun-shy in addressing any of these social components, that any sequence, scene, or moment which might be able to engage a more provocative stance on ethic cleansing or governmental rule (or, at a bare minimum, a stance) is relegated to the background in favor of mytholigizing its white, uninteresting protagonists as emblems of a new order in Hollywood franchising.

Ross sees class as a tool for feigning substance and commentary. He apparently doesn't see race, at all (in that disgustingly PC way). Neglecting to even remotely provide clarity on the circumstances within which his film takes place, Ross meekly throws a few tidbits together, something about an "uprising," a place called "the Capital" where the rich folk live, 12 "districts" where the poor folk stay, and a "lottery" to pick which poor people become "tributes" for a reminder of the "uprising." All are meaningless buzz words to obfuscate the dearth of actual content and trick gullible, socio-politically apathetic viewers (let's hope this means roughly 15 and under) into thinking there are actual stakes. Naturally, Ross treats feisty Katniss Everdeen (Jennifer Lawrence) with kid-gloves, painting her "sacrifice" (she volunteers to take the place of her sister in the titular games) without sociological inquiry - she's merely an archetype, a character, of the worst screenwriterly-type. Moreover - she's white, as is neighborly hunk Peeta Mellark (Josh Hutcherson), noble beau Gale Hawthorne (Liam Hemsworth), and nearly every other character with a speaking role. Given that the film is meant to represent the United States after some "unnamed catastrophe" (such an easy out), Ross chooses to negate any remotely factual, census-driven view of the future. Moreover, he establishes "The Capital" as some sort of 80's-punk/queer haven, where everyone dyes their hair different colors, paints their nails/eyes (men too), wear elegant tuxedos/dresses, and formulate like mechanical, fetishized constructions. Of course, no one in the film is actually gay - at least, the script has been cleansed of any references to sexuality other than of course, hetero. Make no mistake, this is in no way a subtext on Ross's part (there's never even a single reference to it!), but a fashionable move that apes the worst qualities of a show like Glee, valorizing difference rather than probing the implications/ramifications that accompany such an alteration of rhetoric. Furthermore, Ross's whitewashing of the leads extends to a marginalization of all other minority characters - the most offensive coming with Rue (Amanda Stenberg), a 12-year-old "tribute" chosen from one of the more poverty stricken districts. She is killed about 3/4 of the way into the film, not offensive in-and-of itself, but considering her scant role as merely a shadow to Katniss and her dying plea that Katniss keep fighting and (most hilariously of all), that she sing a song for her (she may as well have said "hymn") displays a level of pandering and unconscious white-baiting that should have ceased being fashionable in any post-civil rights work of art. Approaching magic negro levels, The Hunger Games even has the audacity to let Katniss be saved by the Games's only black male (his name is irrelevant, since the film spends little-to-no time even remotely explaining the character), then lets him die off-screen, without an explanation for his death or its circumstances. Meanwhile, the film so simplistically cross-cuts between the Games and the controllers, headed by a boring Seneca Crane (Wes Bentley), that any consistency, kinesis, or sense of subjectivity is readily squashed. Ross, inept as both a storyteller and thinker, gets so lost in his meaningless web of exposition and, eventually, flat love story, that he neglects to even return to first act characters like Haymitch Abernathy (Woody Harrelson), Cinna (Lenny Kravitz), or Effie Trinket (Elizabeth Banks), but all of whom don't receive a proper introduction to begin with. Cinna is some sort of stylist (Ross assumes that's all we need to know) and a scene where the "tributes" are introduced, accompanied by CGI flames, displays Ross's wholly puerile interests - CGI over context, understanding, and true spectacle.

There's nary a satirical inclination at any point in this long, tepidly PG-13, preposterous 142 minute bit of foolishness either, since Ross plays everything textbook middlebrow, with bland compositions and fully exposition driven dialogue (though little of which addresses questions any thoughtful viewer will like to know). Meanwhile, as the Games proceed, each district seems to stand in some sort of line, watching them on a projected screen. The Hunger Games neglects to provide any serious consideration of its central conceit, that eventually, the cut-away's to onlooking faces and irrelevant stares only expedite a recognition of Ross's inept understanding of the medium, itself. Rather than choosing to view the Games from one realm (either completely within them or completely outside), he denies any sense of subjective engagement, instead collaging many ho-hum strokes of ideas still in their nascent stages. The Hunger Games is, ultimately, a staggeringly failed attempt at profundity, primarily because Ross wants to have his cake and eat it too. Given the balked scale of the initial premise, Ross's lack of vision, a total absence of formal interests, and the underlying sense of commercialism run amok - The Hunger Games is one of the more offensive mainstream films of recent years.
Posted by Clayton Dillard at 10:58 AM