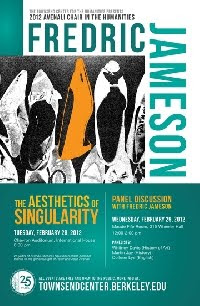 I had the great pleasure of seeing Fredric Jameson give a lecture this week entitled "The Aesthetics of Singularity," at UC Berkeley's International House. The fairly small auditorium filled up rather quickly, eventually packed to the brim, with standing room only, and late-comers hanging out in the entryways. If there were any doubt about Jameson's lasting influence and popularity among intelligentsia, it was squashed by the immaculate turn-out. At 77-years young, Jameson needed the help of a walking cane to take the stage, but his speech and ideas remained as sharp, perhaps even sharper, than some of his finest writings. Jameson's convictions regarding contemporary society have not been altered by recent socio-political developments, only heightened and strengthened. What follows is a summation of his general ideas, peppered among them some reflections of my own:

Jameson begins by making the critical distinction between Post-Modernity and Post-Modernism, a debate which still needs fleshing out even after two decades of study, since there remains little settlement on precisely where the dividing line should be placed between the two. For Jameson, Post-Modernity lies in a historical and periodizing foundation, an extension of late capitalism where spatio-temporal demarcations are placed among certain artistic movements or on finance capital. Certainly, as Jameson points out, misconceptions lie in an emphasis on politics and globalization in this regard - these developments belong more to Post-Modernism, the more suitable definition for what the entirety of Post-Modern thinking indicates; philosophical foundations and symptoms of transformation, leading to the ultimate question: has Post-Modernism produced a new system of thinking or is it simply a proliferation of Modernism, in its waning stages? Obviously, these are not new questions, and Jameson does not treat them as such. Citing many different philosophical variations of the Post-Modern, such as existentialism and phenomenology (clearly these concepts existed before the height of Post-Modernity, but we're trying to avoid periodizing here, so they indeed belong to a similar school of critical thought), Jameson's attempt is to understand how these fissures have been/are occurring within the last decade.

Thus, he begins as any great thinker should - rejecting prior schools of thought/emphasis and claiming them extinct. Marxism, Psychoanalysis, Aesthetics, Ethics - all dead according to Jameson, who sees little value in valorizing concepts that no longer apply to a digitized milieu. Moreover, Jameson asserts the death of the artistic avant-garde, aligning it with the avant-garde politics of the 1960's, hand-in-hand, one directly related to the other. For Jameson, without one, the other cannot exist, and it's hard to disagree with this proposition. However, Jameson reasserts a new form of the avant-garde, in the form of the installation, which are contingent on spatial order and juxtaposition. Highlighting space, mind, and style, these exhibits reject the classic fine arts and emphasize an unexpected, though not random, symbiosis. In this sense, photography is a major component of the Post-Modern, in its ability to conflate and indicate spectacle, an abstraction of the visual, tactile body. Essentially, these drives lead towards a de-emphasizing of the object-obsessed aesthetic tastes that dominated the 20th century and an Event-laden present, consumed by ephemeral ruptures in the intellectual space. The curator, then, becomes a replacement for the auteur, pastiching her way to what Adorno once called the "virtuoso conductor," where there is an absence of human beings from the installation and the space must speak for itself. In this sense, the institution, itself, becomes the replacement figure.

The duality of these events spaces replicates in the Post-Modern individual, who no longer consumes simply content, as there is no content to consume, aside from the experienced juxtapositions. Rather, the space is consumed, the form consumed first and foremost, the content a tertiary experience. Moreover, the new individual simultaneously uses and consumes the space, much like technology, where there exists both use and exchange value. For example, the great Russian author Stanislaw Lem once produced an essay of book reviews for fake novels, based on ideas Lem had created, but would never come to fruition. Here, one sees to track towards truncated attention spans and information blocks (as Ken Russell once prophecized, in the future, all movies would run no more than 15 minutes in length). One can see these equivalents in the fake trailers of something like Grindhouse, where High Concept meets Exploitation, and a 150 second trailer exemplifies all of the information needed to grapple with the totality of an idea, even if in highly elliptical, suggestive forms (a comprehensive study of post-1980's movie trailers has yet to be conducted, something which would likely reveal much about not only Post-Modern pop-cultural aesthetics, but late capitalistic marketing practices, as well). These Post-Modern conceptualisms account for the dearth of new, true ideas, even though a tendency towards understanding concept before content dominates much of current artistic and political practice.

Which brings Jameson to the peculiarities of something like Post-Modern cooking or, what he facetiously refers to as molecular cooking, where there are 35 courses, each one an abstraction of the natural, often separated from the body of the original, and incarnated within a new texture and form. Inside becomes outside and vice versa, though micro-managed and replicated, though rarely in an identical way. These new forms are then recorded by a computerized recipe, where pictures capture the finished product - that ephemeral, unique event which cannot be given a name. In this way, and leading into economics, these are singular events, something which has no opposition and cannot be understood outside of this short-lived juxtaposition. Now, turning towards issues of globalization and economics, Jameson compares these phenomenon with the derivative, which make stable structures problematic. Finance capital economics hinge upon the contingency of a fluctuating market - thus, there is an indissoluable relationship to globalization that cannot be reconciled, whether because of differing currencies or the difficulty in establishing contracts, which are superseded by the passing event. Due to these factors, knowledge of the event can only be attained ex post facto, and thus, there lies little possibility for stringent regulation. Jameson does not rule out the possibility of regulatory laws, but sees them as exceedingly difficult given the proliferation of said finance capital, which he equates with "betting on bets."

At this juncture, Jameson introduces a few questions that may poke holes in his established arguments; firstly, the question of reducing the bodily form and engaging the existential crisis inherent to realizing constant fluctuation, and the allegory of the derivative, which are bets on the future/future's market. Inevitably, he asks whether any futurity can be found in these developments, acknowledging that unto this point, few if any social orders have been able to predict the future. Social classes insure hegemony, on the social scale, but cannot guarantee outcomes. Moreover, Jameson wants to know if there is such a thing as true futurity, claiming economics belongs more to historiography than finance, where a sense of history is "awakened by a presiding vision of utopia." And thus, these presiding visions raise his ultimate question, that of singularity, and its discernible forms in the 21st century.

Jameson provides four variants in his discussion of singularity, the first being a purely philosophical distinction. Here, a form of temporality is established, where singularity is opposed to particularity, and the singular indicates a unique, irreplicable event. No content exists within the singular here and it resists categorization - such are the dominant value categories Jameson notes withing Post-Modernity. Secondly, the scientific form of singularity can be understood in terms of an unauthorized law, which such spatio-temporal events must occur within. Ultimately, the unrepeatable event becomes a scientific instance which cannot be named outside of its singularity. The third form involves computers and artificial intelligence, concerning mutation, whether on a genetic or coding level, leading to visions of either dystopia or utopia. In the dystopic variety, derivations cannot be realized by a mechanical species or the human mind; the return of the repressed establishes a future we cannot imagine, a future where "it is easier to imagine the end of the world than to imagine the end of capitalism." In the utopic variety, there is a post-human mutation of the human form which would lead to something like the android, where immoratlity is attainable and the human body must no longer meet its corporeal end. Finally, Jameson posits the fourth kind of singularity within a socio-political realm, within hegemonic norms, and relationships between the normative and the oppressive, minorities and individuals. Here, cultural norms and their potentially punitive, Eurocentric biases come into play, such as the developments of Feminism, Human Rights, etc. There is a transformation of subjectivity, wherein a displacement of space occurs, universals cease, and experience must remain purely temporal, emphasizing event and ephemerality over memory and longevity. The Bergsonian mold of memory practices no longer exists amidst Jameson's revising of time-space via a Post-Modern relocation of balance, experiencing the unevenness of the contemporary world, a place where agriculture becomes agribusiness.

All of this leads Jameson towards his conclusion, which is that culture is, itself, a space of uneven development. It's no surprise, then, that cultural theory is rapidly evolving and adapting to deal with new media, the form and the event the only remaining, tangible qualities (at this point, Jameson makes a rather flippant claim that action movies of late are a primary example, since they have no plots and are simply affect laden, a claim that's potentially on the right path, but needs much more support by way of spectacle/narrative analysis), all of which leads to consequences regarding our primacy of space. Naturally, these effects cause the deterioration of the subject, and the body is the last reality to successfully survive bourgeois culture (Pierre Bourdieu would be proud, methinks). Ultimately, the bourgeois subject has been reduced to a mere quality of abstraction and anonymity, Moreover, these abstractions lead to a political body politic concerned wholly with real estate, whether of tangible, land-based resources or a more abstract commodification of cyberspace and digital media. Somewhere within these lines lies events like flash mobs, the act of texting, or even the Occupy movement, where a hope of duration is no longer possible. Historicity becomes the loser, there can be no concept of the past or future, and the present is contingent upon its singularity, in all of forms, its meaning defined by the unstable spatio-temporal realm in which the juxtaposing event is witnessed, processed, and ended.
Posted by Clayton Dillard at 1:12 PM