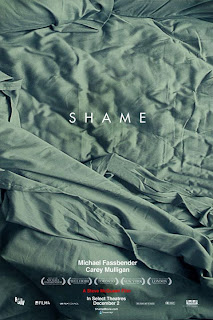 There's an undeniable emptiness in Steve McQueen's Shame, something the viewer is consistently forced to reconcile throughout, to attribute the said lacking to an overall sense of ennui/malaise, or textual flatness and, potentially, triteness. It's easy to see how one would fall on either side; McQueen privileges the long take, whether tracking or stable (as he did in his near-masterpiece Hunger) and in doing so, inherently valorizes a degree of detachment, an absence of interference or manipulation, imbuing the proceedings with a greater sense of verisimilitude, neo-realist in its desire to depict social zeitgeists. Fair enough, but unlike the greatest filmmakers of this sort (Rossellini, Olmi, Burnett, Clark), McQueen lacks any perceptual end or, perhaps better stated, context. Certainly, set in contemporary New York City, Brandon (Michael Fassbender) works a vaguely defined finance job (visions of Patrick Bateman are inevitable), outwardly attached, driven, and committed, but harboring an overall dissatisfaction, momentarily assuaged by recurring sexual endeavors, some with prostitutes, random women, men, and, in Brandon's hope for salvation, a woman named Marianne (Nicole Beharie) from his work place. These issues become further problematized by the arrival of Sissy (Carey Mulligan), his sister from Los Angeles. While the markers of social meaning and significance are present, there's very little actually implemented to instill a sense of cultural specificity or ethnicity into the proceedings (Brandon claims he moved to New York from Ireland when he was a teen, but it's merely part of the film's simultaneous lip service and stubborn denial to commit to any statements, whatsoever). It's not surprising to learn McQueen originally planned to set the film in London, only changing his mind after budgetary reasons forced his hand.

Nevertheless, this lack of definition does not prohibit McQueen from successfully probing what seemingly drives his interest in the material: displacement. In terms of this key conceptual anchor, McQueen masterfully uses Brandon's spaces (home, work, streets, bars) to formally suggest circuity, rather than simply through text, (the film's script by McQueen and Abi Morgan is surprisingly structured, at least in terms of action). The opening sequence (along with a later sequence in which Brandon hits rock bottom) rivetingly display McQueen's flair for composition, montage, and suggestivity. I might even go so far as to say without these virtuoso structures, Shame would unquestionably succumb to a totalizing ambiguity (and, thus, shallowness) that unfortunately characterizes much of the film. In fact, there are moments when McQueen is so obtuse, unwilling to insert any form of meaning into his sequences, that the film flirts dangerously close with becoming inert. McQueen may be close, himself, to becoming that sort of ugly director, so enamored with his own brilliance and artistry, that he forgets to, or is incapable of, communicating significance. Every scene of Shame feels as if it should be more significant than it is (sans the two sequences previously mentioned). They are marvelous, breathtaking, and artful incarnations of personifying longing and fear, the two inextricably intertwined. Then there's stunningly bad scenes, mostly involving Mulligan's character, as when she risibly performs the entirety of "New York, New York" in almost unbroken close-up or Brandon's race home to find Sissy with her wrists-cut in his bathroom. All of the brooding, all of the sporadically convincing artistry, is supported by very little textual conviction and, even worse, a sense that McQueen is playing dress-up, unable to locate the crux in any of his characters, which might inevitably be his point, but becomes beside the point once his point fails to impart distinguishable social significance or, dare I say, pathos.
Posted by Clayton Dillard at 5:28 PM