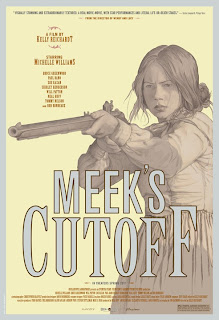 Everybody moves West in Meek's Cutoff, except for director Kelly Reichardt, who takes a slight step South with this handsome, rigidly composed, but textually hollow meditation on Manifest Destiny gone awry, primarily through a hackneyed opposition of nature and nurture, patriarchy lost amidst moral absence, all before the horizon dissolves as the Native-American walks into the sunset. Nothing about Reichardt is obvious or overtly dramatized for easy digestion - instead, she goes the other way, sharing similarities with Steve McQueen, portending significance without ever arriving there, the static takes, somber surroundings only sporadically effective, and generally aesthetically stagnant. Reichardt directs actors well, getting particularly strong turns from Bruce Greenwood and Michelle Williams, but little congeals beyond momentary relevance; like McQueen, Reichardt is verging on self-righteous artistry, deaf to criticism, and tunnel-visioned.

While not the purely joyous adolescent romp that Adventureland was, Greg Mottola solidifies his comedic worth and presence with Paul, one of 2011 sharpest and most consistently amusing comedies, if only because the director and writers/stars Simon Pegg and Mick Frost have such a firm satirical grasp on pop cultural worship, here of that particularly geeky variety - sci-fi fans. Though mixing metaphors and tones galore, there remains a persistent recognition (and reverence) of irrational cultural obsession, without becoming overtly precious or outwardly cynical. Pegg and Frost avoid ironic detachment by sincerely engaging with not just their characters (sure, these are caricatures, but imbued with humanity by Mottola and cast), but the hilariously hostile oppositional rhetoric that facilitates cultural disintegration, epitomized no better than the film's best visual gag, a t-shirt worn by Kristen Wiig's dogmatic evangelical, that's too hilarious to spoil here.

David Gordon Green, in an ironic turn, is now making better films in Hollywood than his last independent efforts (Snow Angels being the most laughable, egregious offender). Pineapple Express and, especially, Your Highness, display the sort of absurdist impulses missing from contemporary comedies. Predicated on being a "stoner comedy," Green approaches the inherently juvenile material with an appropriate degree of irony and sincerity, not outright castigating The Lord of the Rings films for their silly, mistaken sense of importance and relevance (the most overrated films of the past few decades), but fusing contemporary vulgarity and adolescent culture, aligning their sensibilities. It's a deft move, one which seems to go unnoticed by the bland taste-buds of most critics.

Ah, the hip. Little is more insufferable than deliberate idiosyncrasy - except when it's made precious. Alas, such is the case with Miranda July's latest, infused with solipsistic glum to spare, so forcefully preaching difference and individualism (but with mumblecore detachment), that the incongruities begin to overwhelm, and it becomes nearly impossible to stay tuned in. Nevertheless, there's an undeniable charm and effervescence in July's sense of humor (one should suspect much of this is meant to be ironic/satirical), but slathered in Indie cliches and epitomizing some of the worst Sundance-stamped characteristics, The Future renders itself immediately obsolete.
Posted by Clayton Dillard at 10:23 AM