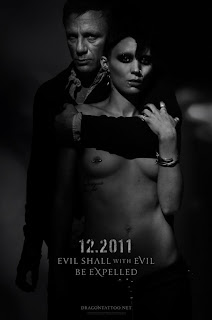 Though a considerable stylistic improvement over the Swedish adaptation (the opening credit sequence, in terms of virtuoso thrill, is something of an instant classic), David Fincher's The Girl With the Dragon Tattoo merely plows through Stieg Larsson's lurid material with little distinct vantage point or insight, playing things at a sprinter's pace, rarely slowing down to even absorb ambiance and aura (a club sequence lasts less than 30 seconds, as does most every scene), much less any sense of character, feeling, and significance. As a 158 minute, break-neck bubble gum rush, Fincher delivers the goods, but his career should have progressed beyond this sort of exercise, especially if he's going to be so transparent in his textual apathy. Rooney Mara deserves kudos, however, for potentially the year's best lead performance.

As forcefully puerile as they come, Zack Snyder continues to display his visual flair amidst narratives suited only for 10-year-old boys who don't know any better or cultural schizophrenics who relish utter annihilation of context, significance, and sincerity. There's no one to blame here but Snyder, whose writer/director/producer credits fully reveal his true interests: comprehensive fetishization, be it computer animated Nazi guards or a pack of skirt-wearing, weapon-wielding heroines, whose "dance" is revealed in an insufferable series of action set-pieces, each more muddled, meaningless, and indistinct than the last. Snyder likes it loud, be it images or sound, and though stretches (say, 10-15 seconds) of the film achieve their giddy ends, on the whole, it's less pure cinema than cultural enema.

Striking a balance between cosmic inquiry and human proclivity is never an easy task, but Patricio Guzmán generally (and, at times, gorgeously) locates such an even keel in Nostalgia for the Light, which pits the filmmaker's existential questions amidst the recovery of murdered Chilean civilians during Pinochet's reign. The film's overall metaphor of illumination, be it the unknown or the past, searingly functions to hybridize his intentions and solidifying that human loss and strife will always (or should) supersede theoretical and/or theological anxieties.

Stagnant, slogging, and generally flat-footed, writer/director J.C. Chandor views 2008's financial meltdown from the Wall Street genesis, over the course of a single day, attempting to show just how cold, calculating, and uneventful malice and greed can be. In that sense, his film succeeds, but his ends are rather obvious to begin with and, outside of serving as an admirable ensemble showcase, featuring the likes of Kevin Spacey, Zachary Quinto, Demi Moore, Jeremy Irons, Paul Bettany, and Stanley Tucci, the tone and aesthetic resemble an HBO production more than a nuanced, feature film.
Posted by Clayton Dillard at 2:49 PM