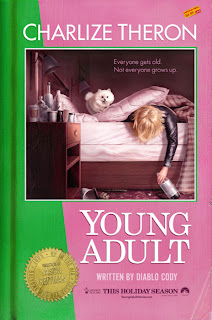 Young Adult corrects Diablo Cody's Juno sins, with a shift in emphasis, away from solipsistic smart-assery and towards a more thoroughly satiric, but genuine examination of generational anxiety, of a distinctly feminine variety. By integrating not just more-obvious allusions to reality-TV image-making, but implicitly condemning the malpractice that goes into forced cultural construction, Cody and director Jason Reitman excavate the crux of both contemporary malaise and displacement.

Let's admit it: Mission Impossible: Ghost Protocol is essentially just a white-collar version of Fast Five, decking-out the franchise with several rousing set-pieces (especially in IMAX), but with very little interest whatsoever in rooting any of the proceedings in a genuine sense of the social, real, or global. Though fashioning a globe-trotting plot, there's a thoroughly feigned sense of awareness, since there are essentially nothing but archetypal characters, with the same sexist, racist, and homophobic baggage that generally accompanies the genre. Moreover, the underlying mold longs for a simpler, more conservative era, where baddies were international stoics rather than domestic threats - but what MI:4 forgets, is that the genre's best entries, from any era, are rooted not in a puerile sense of the fantastic, but a piercing, allegorical fascination with the political, dispersed through character.

Herzog has rarely been so patient and straightforward - Into the Abyss seeks not to neatly place polemics or problematize morality through outside testimonial. Concerned only with individuals close to the Texas case involving a triple homicide, which sent one killer to death row and left the other with a life sentence, Herzog hurtles ahead with more of a reporter's eye than a documentarian's, at least, without the usually elliptical insight that imbues much of his work by taking the micro and turning it grandiose (Little Dieter Needs to Fly, Grizzly Man). Here, the pathos come less from Herzog than his subjects - meaning, by establishing a de facto testimonial presentation, pain and emotion come from subjects grieving over the death of loved ones, lamenting their situations, and coming to little nuance other than the lingering sting. None of this is to say Into the Abyss isn't riveting at times in its small revelations of permanent loss and essence - but it plays like a hop-and-a-skip work for Herzog.

I was certain it would happen someday. A filmmakers has finally made a contemporary, near-equivalent to John Carpenter's Assault on Precinct 13 - that someone being Joe Cornish, whose writer/director debut amicably demonstrates his flair for minimalist depth, utilizing the cinematic medium nearly as centrally as he places genuinely emotive characters, whose camaraderie is rooted within a discernible sense of the social real, but tinged with a proclivity for genre archetypes. Even sharper, using teenagers who're dropped into an adult narrative, Cornish deftly negotiates a terrain between Goonies-like adolescent bait and hard-edged affect, stylish and genuine.

Andrew Naigh one-ups Mike Mills and Woody Allen by insisting on keeping his love-affair romance grounded and wholly tangible, without losing a canny aesthetic emphasis, aligning Naigh's film with the Nouvelle Vague in the most direct way - not just through form, but genuinely entwined, inseparable in that text and form are not merely complimentary or arbitrary, but necessary. There's no gimmick or amplification in terms of textual pretension and, thus, Naigh is able to stay above the line of Indie-bloated preciousness, without insisting his two-guys-talking narrative has added significance. Perhaps Steve McQueen could also take a note or two.
Posted by Clayton Dillard at 9:54 PM