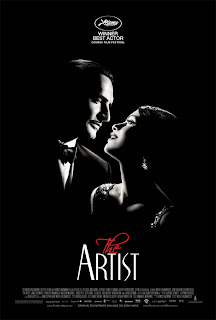 Midway through The Artist, restless, perturbed, and realizing Michel Hazanavicuis' multiple-count offender had no chance whatsoever of redeeming itself in the second half, I reached into my pocket to retrieve a pack of cigarettes, following the lead of George Valentin (Jean Dujardin), whose fledgling career has just been cemented by the flop of his latest, big-budget silent film (talkies are in full-swing, leaving poor George to sit, sulk, and drink). Pouring his shot of scotch onto the table and taking a drag off his smoke, Hazanavicius neatly, literally frames the shot as a perfect mirror image, doubling, certainly to reflect the forsaken actor's fractured state; it's a move that would still be obvious regardless of the circumstances, but seeing how Hazanavicius takes every opportunity possible to neatly situate and explicate his insufferable homage (?) to silent cinema, the moment plays far more requisite than intimate. Now, back to that desired cigarette. The Artist sees life, art, and cultural significance in the most reductive of terms. It harbors nostalgia in droves, precious to the very end in its desired replication of the past, culling cutesy effrontery from nearly every scene, and neglecting to revise almost anything (aside from a dream sequence that's nothing more than bubblegum surrealism). As such, one gets the sense Hazanavicius believes it is 1929 or, even worse yet, wishes it were. Meaning, in the thrust of his icky sentimentality, how could one not wish to light up that cigarette, to dissolve into the grain of the film, to reject contemporary relevance and become lost in a world devoid of consequence, meaning, and time? In other words, a vacuum, a black hole, perhaps even, a heaven. At least, these are one's desires if they succumb to his cultural handicaps.

Heaven apparently can't wait for Hazanavicius, who should take any and all scathing criticism his innocuous, petty, puerile film deserves. The Artist is for those who wish to slide back into a place of pacification, a milieu that values (or more appropriately, valorizes) regression as a means of grappling with hard times, rather than pulling yourself up by your bootstraps. In other words - reassurance over reification. Much like last year's The King's Speech, Hazanavicius views history not with a critical eye (and certainly not an artistic one, as his title oafishly alludes), but as sentimental fodder for one man's ultimate triumph over hardship via a circle of caring, compassionate people. While The King's Speech is far more egregious in its flippant disregard for sanguinely shifting historical discourse, The Artist might be equally detrimental in its condensed explanation of cinematic desire (made even more grating by its literal, meta elements). A silent film about a silent film star? Even Chaplin never went that far. Moreover, there's nary a single satirical angle to any of Hazanavicius' executions, almost as brazenly ignorant as Steven Soderbergh's epic failure, The Good German. Here we have the converse of movie love - its incessant tainting by solipsistic filmmakers.

Parsing through the faults of The Artist, even just in terms of narrative, is almost too easy. But go ahead, give it a go: take a few minutes, write down what you think is likely to happen in the film from this set-up, at least, what would be the least offensive, most middlebrow road to take (think in terms of form and content): *It's 1928. Valentin is on top of the world. His latest film is a massive success. He's the biggest star in the world. Everyone loves him. Posing for a photo, clumsy aspiring actress Peppy Miller (Bérénice Bejo) accidentally bumps into Valentin! Their moment together is captured on the cover of Variety (rancid Hollywood masturbation from Hazanavicius), leading to nationwide speculation as to whom the mystery girl might be. Scoring a series of roles and ultimately attaining leading lady status, Miller's rise peaks right at the introduction of sound.* Now, suppose you were asked to fill in the blanks following, as to hit the most obvious beats. Would Valentin be apprehensive about the introduction of sound? Yes. Would Miller, in turn, fully embrace it and become the biggest star in the world? Yes. Would Valentin blow every dime he has independently financing a big-budget jungle movie of his own? Yes. Will his wife leave him? Yes. Will Miller talk shit about Valentin, only to find out he's sitting right behind her? Yes. Will Valentin have to sell off his entire estate? Yes. Will he drudge out nitrate prints of his earlier films and watch them alone? Yes. Will, in a drunken anger, he set fire to those very prints? Yes. Will he almost be killed in the fire trying to save a single print that has sentimental value for him? Yes. Will Miller reach out to him, feeling guilty for his current state? Yes. Will Valentin realize that Peppy actually purchased all of his shit at auction, out of said guilt? Yes. Will Valentin become even more depressed, and stick a pistol in his mouth? Yes. Will Miller make a mad dash to save him? Yes. Will there be title card asserting ambiguity as to whether or not Valentin actually killed himself? Yes. Will Valentin actually kill himself? No. Will Miller's presence be the saving grace? Yes. Will Miller and Valentin ultimately team-up, at film's end, to become an Astaire & Rogers dancing duo? Yes. Oh yeah, and throughout all of this, will there be a cute dog that does tricks, rescues his owner, and generally looks adorable? Of-fucking-course there will be!

Now, take a look at our script. Pretty bad, eh? Pretty...lame, yes? Lame, in the truest sense of the word: crippled, impaired, disabled. In essence - deficient. Uninteresting. Yet, these are the very plot points The Artist functions with and, to my and any half-conscious thinker's chagrin, without even a hint of suggestivity to something larger, or even, something else...at all. In fact, Hazanavicius is one of few directors that come to mind who unblinkingly sees imitation, pure homage, as true expression - he seeks to make a silent film as if it were the late twenty's, with no more cultural, industrial, or aesthetic awareness than any placating melodrama from the 1950's, when untroubled escapism reigned. Problem is, as with nearly all escapism, this is not an escape from, but an escape to, an inherent devolution of cinematic totality, the reversal of artistic progress made by a filmmaker like Guy Maddin. There's no pain here; not even the slightest hint of real suffering. Silent cinema enables empathy and, when at its best, with films like The Last Laugh and The Passion of Joan of Arc, boils human compassion down to a discernible essence, which wields a power the spoken word lacks. The Artist is content to trample any of these self-evident images with its hackneyed, deplorable case of mistaken decency - it's one of the least compassionate films of the year, if you can see through its inches of goup, slop, and subterfuge.
Posted by Clayton Dillard at 12:38 AM