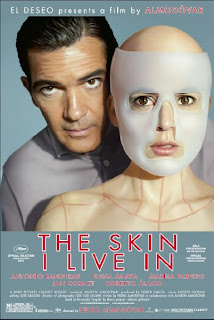 The body, a locus for transgression/transformation, has always been Pedro Almodóvar's central thematic concern - he peels back the layers of sexual difference, embracing (or, at least, striving towards) a sensual cinema, textually concerned with anatomical identity, but visually, it's like Vincente Minnelli meets Dario Argento (meticulous, virtuosity, haunting). Moreover, Almodóvar shares a common link with Brian De Palma, in that each use the frame as boundary, the separation between outside/inside, too intelligent to merely be meta, their frames pulsate with affect. Now, it's of my humble opinion that De Palma (the master) should belong a couple rungs above Almodóvar, but then my taxonomic preferences essentially negate the cinema each yearns to create. In a recent interview, Jean-Luc Godard says, speaking on the films of Francois Truffaut and Claude Chabrol that, "This was not the cinema we had dreamt of." The same could not apply to either De Palma and Almodóvar, who both literally and figuratively dream of an alternative cinema; they do so with the image.

The titular skin, for Almodóvar, is cinema. He lives in cinema, much like De Palma. Hence, they speak from within the elements inherent to the medium. Such a distinction should not be confused with filmmakers like Tarantino or the Coen Brothers, who use cinema rather than speaking it - they do not feel in the same manner. Thus, almost as a confession, Almodóvar grapples with a similar claim made by Michael Powell, when asked about his visual style. He replied: "I do not have a style. I am the cinema." Such seeming arrogance (only to those short-sighted enough to care about semantics) becomes validation when, in his films, Powell does indeed speak with (moving) images.

Thus, arriving to The Skin I Live In, certainly Almodóvar's most impassioned film since Bad Education, the contorted, almost amorphous body of Vera Cruz (Elena Anaya) stretches, bends-backwards over a couch. Her body becomes the locus of filmic (image) obsession, seeking to capture (enclose) through understanding, mechanism, form, flesh, reconstruction, (re)imagining, the means by which touch, contact (and perpetual, existential isolation) construct an understanding of individualistic worth, coded through patriarchal sexuality. Though perhaps more explicit than ever before, Vera's eventual plight is essentially that of any Almodóvar protagonist, male or female - a line dissipated here. To say Almodóvar has finally made his horror film is to miss the message - he's always made horror films, the horror of confinement, the border, the frame, the limits of corporeal control. Striving for liberation, Almodóvar remains among the most refined, progressive, thoughtful contemporary filmmakers.
Posted by Clayton Dillard at 8:02 PM