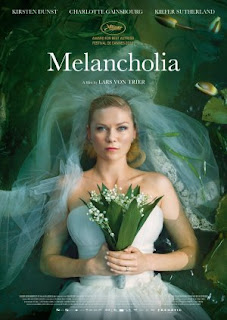 Lars Von Trier...ah yes, Lars Von Trier. Every time I sit down to evaluate the Danish provocateur's latest faux-opus (here the term is more appropriate than ever), I find myself of two minds, often fascinated by Von Trier's bravado, artistry, compositional knack (these qualities are relatively undeniable), yet infuriated by his outward, bratty sense of artistic self-worth, amplified by his so-bleak-it-borders-on-sadistic-farce material. Thus, in Melancholia, that border has almost comprehensively been dissipated, projecting Von Trier's material, especially in its second half, into a hysteria-driven, lushly photographed bit of empty insanity, assuaging claims that the director lacks a sense of humor. Almost undoubtedly, Melancholia is high farce, a film stretched to a 136 minute runtime with so little to say, that one can only imagine the most aristocratic cinephiles will even be able to conscionably endure it, out of some completist masochism, to possess the "knowledge."

That, indeed, may be a strange way to suggest that Melancholia is likely the best film Von Trier has ever made, though it only strikes that way since it's the first time, in his entire filmmography, that he imbues the admittedly hacky material with a visual, aural sense so symphonic, so driven by affectual interests, that it consistently propels the mundane, repetitive narrative anxieties (Kirsten Dunst plays naked and hysterical, Charlotte Gainsbourg is again obsessive and neurotic) towards a useful, contrapuntal experience. In using the latter word, perhaps Von Trier is, and would always have been, best suited to embrace his films as spectacle, not just of grandiosity, like here, in the film's stunning prologue, but of the body, of human pain, of corruptive, venal power. Breaking the Waves, Dancer in the Dark, Dogville: these films all inextricably fail because of their Dogme 95 gimmickry, a fake manifesto, propagated by minds that can't think beyond the literal, that see cinema as a basic set of tenants, not an organism that breaths, lives, and imparts feeling. With Melancholia, Von Trier convincingly retraces many of these formal steps, but his material, as unabashedly cruel as ever, relishes destruction for its own sake, gleefully nihilistic, but lacking sincere conviction in its stance. That's what makes Von Trier a hack; not that he's incessantly nihilistic, but that his preferred discursive method is wholly unconvincing, "punkish" in its irreverence, lacking experiential fortitude. Von Trier isn't even making films for human beings anymore - who could embrace this, beyond those who valorize weird, strange, thoroughly kinky disjointed behavior? Since I include myself in this latter category, I suppose that may partly be Von Trier's point, that rationality, the conscious denial of his material/aesthetic modes on purely moral grounds, constitutes an inherent act of nearly primal reckoning (this film being the yang to Antichrist's yin), where any rejection or attempt to make concrete, oppositional sense of what's being seen hangs the viewer by her prejudices.
Posted by Clayton Dillard at 7:56 PM