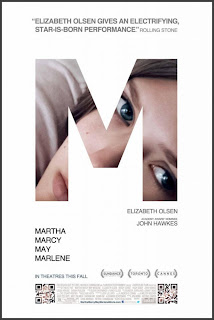 Martha Marcy May Marlene breaths not just life back into American independent film - it oxidizes the tenants that have plagued Indie films for the better part of the last two decades (precious-cute attitudes, ironic-detachment pathos, callow, dysfunctional family neurosis). While first-time director Sean Durkin may not entirely escape the confines of the latter (though, given his thoroughly rigid, airtight narrative (De Palmaesque in its efficiency), scoffing away such an impedance is more than effortless), his gut-punch artistry, in terms of mise-en-scene and temporality, displays a toughness, a resistance, that only the greatest of filmmakers are able to achieve in any of their films, much less the first. In fact, if one has to align Durkin's debut with another, perhaps the best comparison is with Roman Polanski's Knife in the Water, because of similar themes in the narrative, yes, but even more so, a patience, a guiding, propelling directorial intuition, coupled with an eviscerating knack for directing actors - there's nary a moment in Martha Marcy May Marlene that seems to allude Durkin and this mastery ultimately cleanses any minor defects his comprehensively original vision might hold.

Alas, the latter compliment would be sufficient only in expressing a command of personal vision (an impressive, but not particularly lofty feat), were Durkin's aims not so remarkable. Modest at first, then hauntingly revelatory, the truth of Martha's (Elizabeth Olsen) past becomes clearer during her stay with bourgeois sister Lucy (Sarah Paulson) and hubby Ted (Hugh Dancy) on their lakeside, Connecticut vacation home. Piecing differing chronologies proves less a means of misdirection on Durkin's part, but an intricate means of questioning the medium itself, often using match cuts to switch between time-frames, a choice which inherently convolutes a clear sense of linearity, memory dictating narrative, rather than an explicit causality. Martha's past with a cultish, Manson-esque leader named Patrick (John Hawkes) provides the facade of genre thrills, the consistent mixing of time frames suggesting a degree of "sorting-out" will occur to alleviate the psychological fracture. Yet, Durkin never succumbs to these lesser impluses, refusing to give-in and degrade his loftier aims, a mix of the metaphysical and social, deftly, almost satirically mounting a Bergman-esque country house farce (Smiles of a Summer Night) or drama (Through a Glass Darkly), amidst an Altman-esque hybrid of irreverent humanism and the fantastic (3 Women). Reducing Durkin's achievement to a paradigmatic alignment with previous filmmakers is not my intention; rather, by pointing out these potential reference points (my subjective cinematic lineage), once can begin to discuss Martha Marcy May Marlene outside of its connotations, ranging from the Sundance stigma to the 60's-European Art House similarities.

Durkin's does not intend to valorize the ugly, the poor, the geographically "imparied" (to explain poverty-porn critical hits like Frozen River, Winter's Bone, and Precious, all of which received a Sundance stamp of approval). It takes sly aim at not simply class (the aforementioned films are not about "class struggle," but the exploitation of class to assuage liberal, humanist anxiety guilt), but the deeper-rooted tenants of exploitation: ideology. Absolute power, in all cases, corrupts, no matter if it dictates the unconscious need to own a lakeside townhouse (Martha hilariously asks aloud, perplexed, why the couple are the only people occupying the large home-away-from-home) or the disingenuous philosophy of Patrick, whose "family" is literally patriarchy in crisis, turned horrific. Equally irreverent recent films like Dogtooth and The Woman focus less on striving for social commentary than understanding a humanist ontology; Durkin's tongue is planted so firmly in his cheek here, that his biterness, pessimism, and antipathy towards human nature, in general, threatens to propel his film into utter misanthropy which, given Durkin's compelling argument, may be just the place it needs to go. Perhaps the director's only misstep is in partially satiating his otherwise ascetic aesthetic with far too literal presentations of rape and murder (choosing to simply "show" the deeds proves Durkin still has some growing to do), but these scenes don't sully the piercing effect of the film's larger implications, schizophrenia as human condition, less about the suffering individual, than the fractured, false consciousness whole. Like any great philosophical piece, the "right" answers aren't so readily available, morality seemingly more opaque at the end, than when the film began.
Posted by Clayton Dillard at 7:29 PM