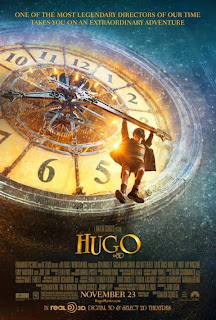 Any viewer that has an invested interest in the future of cinema, as it becomes obfuscated with television, digital media, and assorted forms of technological emergence, must view Martin Scorsese's Hugo with equal parts enthusiasm, apprehension, and castigation. Let's parse through the film's outwardly jejune interests (Dickinsian abbreviation, wonderment, isolation) to Scorsese's core interests, as artist and filmmaker: the emergence of technology, a nostalgic view of the past, and, ultimately, synthesizing the two using altered apparatical forms (3D) with classical cinematic mise-en-scene (deep focus, tracking shots), to explicitly reconcile the early days of sound (the contemporary parallel obvious) as progenitor of progression and inhibitor of expression - in other words, a reductive, derivative view of history and technology that filmmakers have been grappling with for the better part of the last half century. Moreover, in Scorsese's first attempt to confront these apparently engrained emotions, he does precisely what a thoroughly modernist filmmaker would: instead of anything slightly askew or avant-garde, he makes an accessible film, a potentially simplistic one, though beautifully rendered and played, in the traditional sense.

Here's how we know Scorsese has devolved into a filmmaker that's merely a level or two ahead of someone like Tarantino (a back-handed compliment) in terms of text: he likens his use of 3D in Hugo to the emergence of technicolor in the 1940's, an aesthetic tool that has no explicit ties to theme or form (color does not alone comprise form), much like 3D simply tightens the frame, but provides very little by way of altered affect, at least in how contemporary Hollywood is using it. Meaning, Scorsese's awe at the new technology (he has since claimed he wants to do every subsequent film in 3D) reflects his artistic regression, wishing to engage an inherently consumerist cinema that offers little by way of depth, personality, or subversion. Sure, there's potential subversion in the way Scorsese reintroduces silent cinema, in 3D, full clips from A Trip to the Moon or The Great Train Robbery, but only in the sense that it reinvigorates the potential for interest in repertory cinema. Hugo is not a political, personal act. It may reveal Scorsese's unfortunately nascent state of filmic adoration (much like Shutter Island merely afforded Scorsese the chance to make a film noir, devoid of conviction), where the enchantment, the awe, supersede the desire to engage pure expression without didacticism, which Hugo nearly packs to the brim in its lecture-heavy second half.

Furthermore, there's something purely middlebrow about screenwriter John Logan's situation of personal failure, particularly in Papa George (Ben Kingsley), whose ultimate dissatisfaction lies in self-pity, that his illusions and predilection for performance are no longer valued by a rapidly evolving society. Logan purposefully seeks to induce empathy via isolation and Scorsese misinterprets Jacques Tati by turning rigid artistry/satire into sentimentality and lament, stuck in a psychological stasis, unable to move past his debilitating focus on the past, in both form and content. Critics and others can claim Scorsese has done that by embracing 3D, but that's little more than wishful thinking; those who view cinema-love through a Spielbergian lens are very likely to hail Hugo as a masterpiece; actual cinephiles, who view the cinema as more than simply a facilitator of child-like awe, will smile sporadically throughout, but on the whole, be left with more than a slight sense of suspicion at Scorsese's aims, dubious of his CINE 101 historicism.
Posted by Clayton Dillard at 5:26 PM