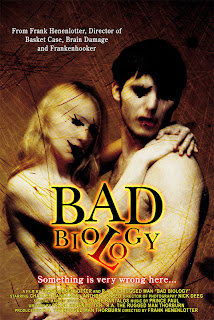 Bad Biology aka The Girl With the Crazy Pussy aka You Dirty Little Cunt-Bitch-Whore, went relatively unnoticed in its 2008 release (even by a cinephile like myself), because the marketing/product machine has become so large, so looming, that there's no room for a true visionary like Frank Henenlotter, whose entire oeuvre has been marginalized because it exists within the system, to a certain extent, and is a palpable threat to dismantling the "values" of a cinema predicated on maintaining a hegemonic order that never too forcefully deviates from those parameters. Now, I'm not suggesting Henenlotter functions as a part of the system, more that his films suggest genre works gone awry, injected with a subversive tinge, using sex, the body, violence, and the grotesque as a means of over-satiation; Henenlotter is funny and genius because he's refracting Americana, disavowing scopophilia through a Carnivalesque wit - not enough contemporary filmmakers have it.

Jennifer (Charlee Danielson) has a problem: she's a nymphomaniac like no other, she "feeds on orgasms," with needs physical not psychological, she believes "God wants to fuck me." Art, excess, pornography implode amidst sex sequences that evoke jouissance, death/pleasure inseparable, copulation inevitable (Jen also has, let's just say, very active genitalia). Speaking of, Batz (Anthony Sneed) is her unbeknownst soul-mate, struggling with his active, mind-of-its-own cock, which has "troubled" him since he was a tyke (his member seems to deliberately evoke Duane's troubled "little guy" from Basket Case). Reporting on the specifics of the narrative is useless, since Henenlotter's brilliance comes in his spirit, critical but fascinated, disgusted but enamored - ambivalent. Such a film must remain in a "cult" realm, so long as more obvious, literal, and finite fare receives cultural perpetuation.
Posted by Clayton Dillard at 11:26 AM