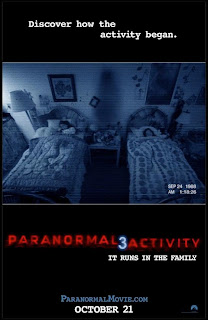 Aside from offering an adept tutorial regarding On and Off-screen space, Paranormal Activity 3 provides little to legitimate its "Where's Waldo?" gimmick, as ephemeral as it is cynical, not utilizing its "personal" aesthetic for political means, but merely as an asinine piggy-backing ploy, seemingly oblivious or apathetic to why its domestic terror via home video footage resonates so forcefully with audiences (PA 3 became horror's biggest opener this weekend with a haul of roughly 54M). Not that any of this should surprise considering filmmakers Henry Joost and Ariel Shulman's previous film, Catfish, equally exploited and remained oblivious to its faux-documentary foolishness, the opposite of self-reflexive, questioning representation by accident rather than through an honorable attempt. Though Catfish could at least offer an interesting case study of ever shrinking lines between (non)fiction, Paranormal Activity 3 merely seeks to fulfill itself as a product of Paramount's ingenious marketing campaign (anchored by a "Bloody Mary" scene which does not appear in the feature, itself).

Moreover, Joost and Schulman prove to be the philistines their debut suggests, in that their interests are so miniscule, so detached from the personal becoming the political, that Paranormal Activity 3 could barely even be called ephemeral, its phantasmagoric pretenses masking retrograde narrative nonsense that literally devolves into haggard old-woman paranoia, without the slightest hint of satire. Expect straight-faced babysitter screams and scared best friend sequences too; Joost and Schulman are embarrassingly prideful about their derivative demeanor, aping from the franchise itself and other films so liberally, but disguised under a suggestion of innovation, that by the film's limp-wristed, "that's it?" conclusion, the stringent odor of consumerist, naif-devised bullshit abounds.
Posted by Clayton Dillard at 7:31 PM