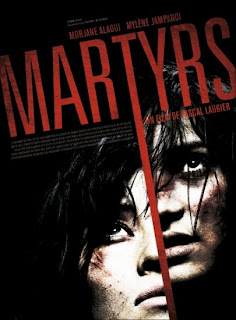 Pascal Laugier’s Martyrs is a horror persona non grata, a misappropriation of the horror ethos for a “genre-bending” (as knee-jerk enthusiasts like to call it) exercise in banality, feigning provocation and anger as it blindly drives to its fashionably nihilistic conclusion (one of the most risible in recent memory). Several have claimed this as some sort of “stunning masterwork,” “unforgettable experience,” and “masterpiece that transcends the genre” (all quotes taken from the DVD jacket), but one wonders after enduring such puerile inanity (make no mistake, this is idiot savant stuff par excellence) what exactly its enthusiasts find so rewarding? Is it what they perceive to be its depravity? The levels of gore? Profound narrative implications? Hardly. Martyrs is merely prolonged foreplay – it never really gets down to business.

Such a film inherently forces one to confront taste, to make an aesthetic judgment amidst the revenge-driven shotgun-wielding (whoa! So nutzz!), the return-of-the-repressed golem/ghost figure (fucking creepy!), the aged matriarch with delusions of grandeur (what a sick bitch!), and the skinning, beating, whipping, and (let’s face it) crucifying (the film more than alludes to “stages of the cross” pretenses). Anyone not tricked by the numbly outlandish visual fetishes will be able to permeate Laugier’s thin layer of obfuscatory bullshit, and discover that, indeed, very little lies beneath. Early in the film, during a chilling opening credits sequence, there’s a sense that Martyrs will be a rebuke to art house and bourgeois voyeurism, establishing pretenses of discourse only to dissolve them for untamed sequences of brutal torture. Laugier is far too self-absorbed and aware to participate in, what I’ll call, “Trojan-Horse” cinema, a film that outwardly appears to function under genre archetypes, only to systematically implode these signposts and force complacent viewers to confront subsumed truths that govern their capitalistic, patriarchal desires. Nah, Laugier’s too worried about fucking-up rather than fucking-with genre, an imperative distinction that separates art from a growing trend of red-herring cinema.

Martyrs plays on recreating images of historical trauma, only it has absolutely nothing to say or offer (aside from exhibiting extremely poor taste), exploiting instead of expanding. Moreover, Laugier engages in the same sort of scumbag lesbian fantasies as Alexandre Aja’s High Tension, but he’s added an additional element: a matriarchal, guilt-ridden hag, who receives the pleasure of ultimately blowing her brains out, the film’s concluding image (how daring). She gets to say hilarious lines like, “There are only victims left. There are very few martyrs anymore,” and, referring to the lead’s prolonged punishment: “She experienced authentic martyrdom.” Laugier has clearly watched (and probably jerked-off to) Saló an unspeakable number of times, seemingly infatuated with its unrivaled postulation of fascism, cinema, and degradation as abjectly intertwined. Fair enough – but Laugier’s interests bend more towards the degradation, the guy who likes the film because of how “fucked-up” it is, rather than for its more suggestive qualities. Gorehounds, scumbags, assholes – dig in.
Posted by Clayton Dillard at 2:12 PM