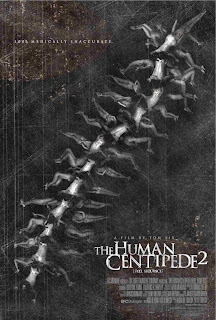 The Human Centipede II: Full Sequence might be more schizophrenic and creatively impotent than its overweight, mimetically-driven lead character; in a meta-device that consistently keeps the narrative from approaching any sort of resonance or sincerity, parking-garage attendant Martin (Laurence R. Harvey) is obsessed with director Tom Six’s debut feature, The Human Centipede. He watches it every day and night on his laptop while at work; he keeps a bounded scrapbook under his bed, full of fetishizing over the original’s reputedly “100% medically accurate” mantra and especially lead actress Ashlynn Yennie, who unsurprisingly turns up as herself, late into the film. Are these ironies particularly inspired or compelling? Not really. Six situates them as some sort of perverse, socially refracted mirror, but to have any success with this brand of purported of insight, he needs more than a simple (solipsistic) idea. If M. Night Shyamalan took shit for casting himself as a prescient writer in Lady in the Water, Six’s sophomore feature merely cannibalizes his original film and ventures so far into self-effacement, one can only suspect the original as the set-up for this ludicrous, feature-length payoff (however, The Human Centipede III: Final Sequence is underway, apparently).

Nevertheless, while the high-concept stuff is easily the film’s weakest point (it does little more than allow unhinged crudity and excess), the strongest material comes during the first half, inside Martin’s home, where he lives with mother (Vivien Bridsen) and frequent visits from grossly-bearded, pervert (shock) shrink Dr. Sebring (Bill Hutchens). When questioned about Martin’s obsession over “making a centipede with twelve people,” Dr. Sebring responds: “The centipede is likely a phallic substitution for Martin’s displaced feelings of hostility and anger towards the probably sexual and psychological abuse of his father.” Six’s play is not to make this a viable explanation, but to lampoon any sort of reductive psychological or sociological reading. Problem is, Six’s treatment is nothing remotely new, denying Martin any voice whatsoever (he literally never speaks a word), then littering the film with allusions to previous trauma, albeit (again) outrageously (there’s the suggestion that “baby’s tears make daddy’s willy hard”). By suggesting there are no explanations (and, ultimately, intimating the film’s events may never have even happened), Six intentionally effaces his entire film – something, while moderately interesting conceptually, that’s simply faux-bad-boy antics, much like the bulk of The Human Centipede II’s purported “depravity.” Six lacks the ability (or will, could be either) as a filmmaker to give his horrific deeds any gravity; For example, Martin beats a pregnant woman, strips her naked, makes her part of the centipede. Near the end of the film, she escapes, hops in a car, dazed and frenzied, trying to start the engine. Before she can, she goes into labor, the baby plops out, lands by her feet. She’s elated; however, a scare from Martin cause her to scream, she puts pedal to metal – only her newborn baby’s head just happens to get in the way and she crushes it like a fresh cantaloupe. Now, the moment surely elicits groans, gasps, and guffaws (all three at once, even), but it’s hardly “provocative,” because the image, the deed, is merely exhibition, a singular act devoid of any ties outside of simple exploitation. If this is Six’s point, it’s self-defeating; moreover, Six’s mostly clinical approach to terror, shame, and gross-out lack artistry, or, even cohesion in argument – if Six is attempting to get academic, he’s too iffy in that pursuit to maintain consistency.

Thus, everything about The Human Centipede II is a bloody, shitty mess. Six commits to at least four different thematic and tonal pursuits – even chaos and nihilism needs consistency and some sort of internal “logic” (the word is insufficient) to be effective. So, when shit literally sprays onto the camera (the only color that’s (ahem) inserted into Six’s black & white cinematography), when Martin jerks-off with sandpaper, when an actress mistakes Martin’s luring-in for a Quentin Tarantino film audition, when Martin has an actual centipede funneled into his ass, when 12 people are successively executed at point-blank range, when Dr. Sebring claims he’d like to “fuck that fat retarded boy up the ass,” – the reaction is laughter, cringing, or head-shaking – the specificity of which is seemingly irrelevant to Six, so long as it’s one of the three. Is it a good thing The Human Centipede II exists? Yes. Does that make it a successful film? Not by a long shot. Nevertheless, Six’s freak-show, mad-scientist mentality does sporadically induce more than simply self-consciously trite excess, but since Six is so wrapped up in himself and his (delusional) role as provocateur (need it even be suggested that Martin is Six’s stand-in?), he comes off as little more than a self-professed, prideful, badge-wearing pervert, chasing his own ass.
Posted by Clayton Dillard at 11:12 AM