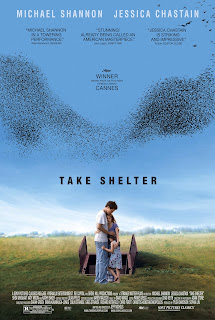 Great horror films express themselves in a way that's inseparable from the milieu they inhabit - environment is the direct correlative for enabling a breakdown of order, consciousness, and control. Jeff Nichols' Take Shelter, while not outwardly projecting archetypes that readily signify its terrifying implications, functions on dread (the obvious term), but more precisely, the horror of post-dread, not that something bad is inevitably going to happen, but that there's no solution to correct said inevitability - a sense that an abject past, an intangible sin, has solidified (predetermined, if you will) an unwavering temporal logic, irrational in its seeming fixity. Nichols brilliantly takes these sensations and anxieties, then deftly ties them to a zeitgeist that feels nearly prescient in its class-based specificity. Everything about Take Shelter is implicit.


Underlying the overt narrative, which involves Ohio based, middle-class family man cum construction worker Curtis (Michael Shannon) experiencing a series of nightmares and delusions, is one that devastatingly attests to the fragility of middle-class security; as Curtis's delusions grow more intense (pissing the bed, seizures), his inability to seek help stems from both his own stubbornness (bred from culturally-specific shame and fear in failing to serve as familial patriarch) and health care/treatment insufficiencies (the doctor Curtis really needs is a few hundred miles away). Feeling the brunt of his deteriorating mental health are wife Samantha (Jessica Chastain) and deaf daughter Hannah (Tova Stewart), the latter of whom has health problems requiring continual attention. Moreover, once Curtis's negligence, primarily in obsessing over constructing a tornado shelter in his backyard, gets him fired, the health benefits dry up, the beach trip must be cancelled, and a once happy family is forced to go into survival mode. Nevertheless - the question remains: is Curtis slowly becoming a paranoid schizophrenic...or are his apocalyptic visions coming to fruition?

Few of the more literal narrative questions are of much significance, ultimately, since the film creepily, devastatingly reveals its true hand once all of the economic factors begin to become more horrifying than any potential impending natural disaster; more than metaphor, the lightning, thunder, and storm motifs reaffirm an instability crisis, that when the ideal dissipates due to various factors (a falsely conscious ideal at that), there will be no corporeal savior, no one to provide solace other than a community of like-minded, like-class individuals - but only to a certain extent (Shannon's primary Oscar-bait scene proves the tipping point). Practical solutions only tread water; faith and religion (though not directly stated in the film) are implied through Curtis's potentially Biblical visions. Mental illness, financial crisis, familial horror - Nichols's near-masterpiece considers all of these variables in producing his complex vision of tradition lost, future uncertain. Here's the film Dream House could (should) have been. Take Shelter's release amidst the Occupy Wall Street movement is a chilling corollary, one which Nichols obviously couldn't have foreseen, but a direct affirmation of his film's immediacy and gravity.
Posted by Clayton Dillard at 4:38 PM