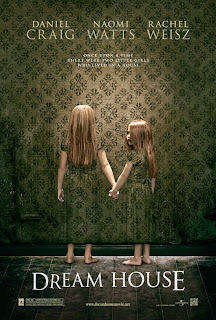 There are many horrific things about Dream House, least among them the film's content which, once the nauseating narrative twists have taken shape, hardly resembles much of anything at all, and certainly not a horror film. Such a transition would be fascinating if it could be called an evolution, starting with one ethos and morphing into another - rather, nonsense replaces operative logic. If one didn't know any better, it would be tempting to label director Jim Sheridan and screenwriter David Louka (whose previous credits should have tipped-off incompetency) mad-scientist satirists, formulating a truly abject horror film, with the veneer of archetype disguising an impending implosion of normative expectation and diegesis. In fact, nearly twenty minutes into the film, I thought I was witnessing a masterpiece goofily establishing cliche only to (hopefully) deftly deconstruct the facade of domestic security, irrational belief and, as the title alludes to, the "American Dream." Instead, it becomes abundantly clear Sheridan must have suffered some sort of serious head injury during production. The film doesn't make a lick of sense.

Aspiring to cover nearly identical territory as Martin Scorsese's Shutter Island, Will Atenton (Daniel Craig) leaves his job and the city (an opening sequence is amusingly surrealistic) for a house in the suburbs with wife Libby (Rachel Weisz) and two young daughters. Unfortunately for Will, the previous owner murdered his family, something he learns about via cultist teenagers, hilariously uninvolved police officers, and neighbor lady Ann (Naomi Watts). Clue #1: Always follow the casting rule: when a big star plays a seemingly insignificant role, it ain't so insignificant. Moreover, those familiar with the film's spoiler ridden trailer know the first eye-rolling twist: Will is actually the same man who murdered his family, freshly out of the asylum, created a new name for himself (in an hilarious revelation, Will took the new name from his wrist-band ID number), and has been occupying the "space" where his trauma rests. Ultimately, and lacking any gall to force Craig to wrestle with repressed demons, Loucka integrates a pathetic sub-plot to alleviate Will of his crime, leading to a fifteen minute finale that's as funny, ludicrous, and pathetic as any film from 2011.

Oddly enough, had Sheridan taken Loucka's script, dialed it two clicks to the right, and amped up the subtext, Dream House could have been genre-busting auto-critique; one might expect as much from Sheridan, whose previous films exist outside of genre, often turning towards familial concerns, but without succumbing to readily marketable signposts. His sensibilities here, however, suggest someone well outside their comfort zone, a deer-in-the-headlights of sorts, so uncertain on how to manipulate a sub-hackneyed script, that he just closed his eyes and hoped it would even mildly gel and disguise his confusion. Themes are just jacked-up; is this an affirmation or critique of domestic-driven desires? Why is David Loucka allowed to keep writing scripts? Has Jim Sheridan gone off the deep-end? Indeterminate, no idea, apparently so.
Posted by Clayton Dillard at 9:27 AM