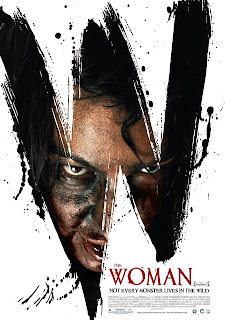 The bleakest, most perverse satire of American, patriarchal domesticity since A History of Violence, Lucky McKee returns after two lukewarm entries (The Woods, Red) to finally fulfill the promise of his debut feature (May). Unlike in his lesser films, McKee now challenges dominant norms that resonate more through suggestion of a prolonged period of exploitation than explicit real-world links; here, it's the American narrative of nuclear family under patriarchal rule, the "in the name of the (white) father" order that facilitates racism, misogyny, and bigotry. McKee's dealings aren't particularly timely, per se; in fact, the film lacks cultural specificity to place it in the "here and now," and could almost belong to the early wave of domestic terror films in the early 1970's, begun by The Last House on The Left, Deathdream, and The Texas Chainsaw Massacre. Nevertheless, in refusing to make allusions to reality of any sort (other than grand narratives), McKee's film takes on an uncanny quality, even more terrifying in its implication that these issues aren't so much a "return of the repressed," since they remain firmly in place, hardly absent even amidst claims of "radical" social reform and politically correct speech. When sociopathic/rapist father Chris Cleek (Sean Bridgers) finally spews his hate-filled, epithet-laden rhetoric - it stings quite a bit.

The Cleek family lives in a middle-class country area; under the father there's mother Belle (Angela Bettis), quasi-goth loner high-school daughter Peggy (Lauren Ashley Carter), young teenage son Brian (Zach Rand), and post-toddler Darlin' (Shyla Molhusen). The facade of their normalcy is revealed through Chris's depravity; finding a mysterious, "uncivilized" woman (Pollyanna McIntosh) in the woods while hunting, he bags her, clears some space in the cellar, and chains her up. She's ferocious; a mesmerizing opening sequence suggests she's been raised by wolves, but that's the extent of her background. Quite like Terrence Stamp's unnamed visitor in Pasolini's Teorema, her presence bubbles tensions lying just beneath the surface, eventually bringing them, by turns both hilarious and horrifying, to an irretractable boiling point. Much like last year's Dogtooth (the first masterpiece of the new decade), The Woman is not so much parodic as embittered by its almost ineffable anger directed towards hegemonic cultural codes. However, by turning hostility into humor and irreverence, both filmmakers imbue a degree of sincerity, which makes their blood-soaked codas equal parts indeterminate and cathartic, but not illusory - the problem still lingers.

Most interesting about The Woman is the "battle-of-the-sexes" showdown that materializes throughout; suggesting "boys will be boys" rhetoric as the ignition of sexist subterfuge and nationalistic pride (an irrational belief of self-righteousness), McKee goes to dark (but necessary) places in fulfilling the totality of his satirical grasp, keying in on (as few filmmakers have been able to) a distinctly American focus on materiality and capital. When Brian sneaks into the cellar to torture and rape the eponymous Woman, the father's ultimate assessment is: "Well, if no one was harmed, then everything's fine." In concentrating on tangible results (visible evidence of bodily damage), McKee implicitly critiques capitalistic drives, the belief in "no harm, no foul" if the damage cannot be evidenced in empirical ways. Ignoring shame, pride, honor, dignity (emotion, essentially), morals and ethics are irrevocably cast-aside, enabling a rationalization of depravity. While one of the sole references to religion is a bit egregious (Chris cartoonishly claims he "still wants to get to heaven" after committing rape), it nevertheless problematizes a reductive reading or take, since McKee is not pinpointing a specific genesis for this sort of chauvinist, "mightier-than-thou" behavior. There's a persistent ambivalence concurrent throughout, and right when The Woman feels like it's about to go off-the-rails, McKee tightens the screws, ups the ante, and dares you, to use a crude (but appropriate) colloquialism, to "pull-out." When McKee's at his sharpest, there are no easy answers.
Posted by Clayton Dillard at 9:08 AM