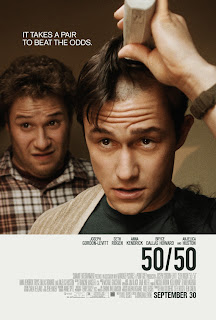 What an infuriating concoction Jonathan Levine's 50/50 is. There hasn't been a film in some time that's this genuinely admirable, but almost completely misguided; so, Adam (Joseph Gordon-Levitt) has cancer. He's 27, works editing stories for a radio station, exercises regularly, doesn't smoke or drink, even refuses to have a driver's license because it's "the fifth leading cause of death." Ho-ho the irony. Nevertheless, his cancer leads him to reevaluate his life, consisting of a troubled relationship with cheating girlfriend Rachael (Bryce Dallas Howard), his potentially selfish best friend Kyle (Seth Rogen), a distant relationship with Mom (Anjelica Huston), and his newfound interest in baby-shrink Katherine (Anna Kendrick). Bonding comes amidst chemo sessions with two old-timers, a new-found appreciation for medicinal marijuana, and occasional ventures with Kyle to get laid (Adam reluctantly uses his cancer to attract women). There's much delight to be found in small moments here, such as a brilliant three-way comedic exchange when Kyle discovers Rachael's infidelity, Gordon-Levitt's vacillating levity and anger (strong performance), and the film's refusal to pander by engaging religious matters of any sort. Nevertheless, in opting for the latter, 50/50 panders to secular pride, not choosing atheism via dialectics, but through cowardice, as if screenwriter Will Reiser doesn't have the cojones to broach the subject and Levine isn't concerned about calling him on it.

Moreover, amidst this absence, Levine opts for syrupy indie-pathos, his film custom-fitted with a self-pitying soundtrack, tidy moments of pain and pleasure, and characters that never give the lead any real instances of trauma. Rogen's douchebag demeanor disguises genuine empathy and self-doubt; Kendrick's artless tactics evoke her girlish sexuality; Dallas Howard's shrew gets an audience pandering "fuck-you" send-off. Adam never really has to face death - the film vapidly struggles with repressed fears and incomprehensible mortality. The extent of his pain explodes during a screaming session in a car, followed by an "I love you" phone call to an in-bed, reading Kendrick (what a saint). Where's the shittiness? Where's the subjective trauma, the uncorked rage, the endless questioning, the desertion, the isolation, the feelings of utter helplessness? Reiser and Levine have little interest in really putting Adam up against it for, when one friend leaves, another one enters, inherently sluggish choices that merely placate viewers who want to shed a false tear. Most offensive, though, is the ending, not just that Gordon-Levitt is (spoiler) going to be okay, but that his survival is patly, garishly used for succinct closure, regressing back to opening idiotic behavior/discussion (Rogen swabs ointment on Adam's back scar...with his finger! HAHA), and an official meet-cute between healthy Adam and willing Katherine that completely tanks all conceptions that 50/50 is anything more than liberal-baiting idiocy.
Posted by Clayton Dillard at 8:52 AM