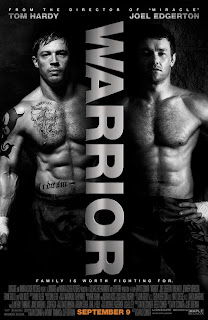 Two artistic ends tug against one another in Gavin O'Connor's fascinating Warrior: (1) the macropolitics of working-class struggle, men who use atavistic impetus to transcend the emotional and capitalist trappings (both are equated in the film) that inhibit their happiness and (2) the minimalist, physical representations (Tom Hardy, Joel Edgerton, Nick Nolte) of what makes a "man". Unfortunately, Connor is not an astute enough filmmaker to really probe the ontology of their drives, neither psychological or phenomenological, instead casting their ends of desire merely within the realm of commonplace cliche, a stock genre tool. As Simone de Beauvoir might say, "It goes without saying that they are men." Unlike Lindsay Anderson's This Sporting Life, which is the greatest sports film ever made, the question of desire (and how brutish assertion approaches the Lacanian jouissance) remains an inconsequential one. Nevertheless, O'Connor's visual work with the male specimen (actual bodies) is one of the finest breaks from contempo-cliche in recent years.

Many critics often refer to This Sporting Life as kitchen-sink realism, emphasizing its foundational interests on urban verite. A more apropos examination utilizes the Freudian underpinnings of a phallicized industrial milieu, then sees Anderson's inversion of psychoanalysis via poetic montage, aligning Frank Machin's (Richard Harris) rebellious (self-destructive) energies with an unconscious rejection of hetero-normative order, and, thus, capitalism (an exploitation Machin(e)). His collisions on the Rugby pitch don't so much provide an arena for the expulsion of repressed desire as they reflect simulated phenomena of exchange (in the monetary sense), his flesh the direct correlative to profit, which in turn degrades both his emotional and sexual energies. It's a virtuoso visual proposition, lithe and bereft of hackneyed corporatism, reflective not of mainstream political values but phenomenological humanism - essence over capital.

The same cannot be said for O'Connor's conservative inclinations. He positions mainstream sports culture with a fan's eye, not a critic's. He's not out to examine the culture, only to propagate it. The film's set-up, which relies heavily on proletarian anxieties of class struggle, familial fracturing, and their transcendence (through feral behavior and capital) merely reinforces norms of representation. Exposition driven at times, his only worthwhile contribution is a deft montage utilizing split-screen (though to little useful aesthetic ends) and knowing when to go in for a close-up on Tom Hardy's ferocious mug. In many ways, actor's presence supersedes directorial authority, compelling mainly because of O'Connor's conduits, rather than his mise-en-scene or insights. Nick Nolte enervates the veneer of method-acting histrionics by encircling actual, palpable pain, a "papa" that permeates archetype to unearth pure emotion. It's a performer's showcase, especially between Hardy and Nolte (Joel Edgerton is good, but nowhere near his fellow actors' levels of unrestricted feeling). Were they not contained in a film heavily reliant on cultural pandering, they would qualify as stand alone works of art. Perhaps they still do.
Posted by Clayton Dillard at 8:53 AM