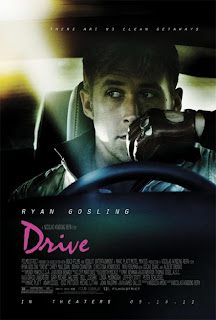 Nicolas Winding Refn's Drive is a rebuke to nostalgia, seemingly participant what with its 80's synth-pop score, reverent aesthetics, and influence from prolific filmmakers like Michael Mann, William Friedkin, John Carpenter, Martin Scorsese, and David Lynch (to name a few), but adamantly opposed to mimesis as a means of grappling with psychological and cultural deficiencies. Imitation begets confusion, duplication being the avenue to erasure of essential perceptibility, and of purity and goodness. At the core of this dilemma lies mythology, wholly in the postmodern sense, the accumulation of mediated images resulting in an imperceptibility between reality and simulation. Refn has managed, however, to brilliantly extricate this concept from the science-fiction genre, replacing literal machines (borgs and that stupid shit) with a living, breathing automaton, named simply Driver (Ryan Gosling). Under the guise of an action film (this is no more a genre piece than Taxi Driver), Refn produces something akin to pastiche, only in an inverted form, an amalgamation of cinematic influences as testimony to his highly personal form of introspection, not with solipsism or explicit acknowledgements, but a simultaneously critical and participatory discursive mode, both hero-worship and admonition against it, not so much hypocritical as hypercritical, both of fellow filmmakers' contemporary malpractice and of itself - in many ways, Drive is self-effacing, passionate in conviction, but nihilistic and pessimistic that such feeling translates into any functional humanism in an era so detached, unmotivated, and mistaken.

Drive opens by recalling both Thief and To Live and Die in L.A. (particularly the latter), a kaleidoscopic presentation of pulsating rhythms, fetishized images, and stark contrast lighting, isolating Driver as he either frequents his barren, blank-walled apartment, or simply...drives. By day a stunt driver/auto-shop mechanic, by night a getaway driver, the initial minimalism plays as obvious doubling, Driver merely a stand-in, a fake. However, once night turns, Driver steps into his own film of sorts, now the pulse-pounding hero he can only pretend to be on film sets.

His desires tend towards anonymity, at least until he meets neighbor Irene (Carey Mulligan) and her son Benicio (Kaden Leos), whom he forms an immediate bond with. Refn quickly stamps-out any meet-cute pretensions, however, instead giving Irene and Driver very little dialogue, their relationship founded upon looks, glances, touches, and, perhaps, a deeper understanding of their similarly fractured lives. When Irene's hubby Standard (Oscar Issac) returns home from a jail stint, he enlists new friend Driver to pull off a heist, only to have things go horribly wrong (think Anton Chigurh level-carnage), placing Driver in deep shit with crime boss Bernie (Albert Brooks) and psycho-thug Nino (Ron Perlman). Little do they know the seemingly level-headed Driver is actually a deluded, sadistic psychopath, capable of shooting, stabbing, hammering, and drowning his way through a slew of baddies to protect his "damsel in distress" and her son.

Much controversy will come from the propulsion that leads Driver to risk himself for a woman he's, presumably, not even had sex with. His notions of valor are predicated on fairy-tale conceptions of masculine and feminine, puerile in their short-sightedness, protection through violence as the only recourse to closure. One would be mistaken, however, to simply align Refn with Driver, insofar as Refn's auto-ironic style continually restates his paradoxical desire to both distance himself and get closer to Driver's frighteningly easy ability to flip a switch of bloodthirsty destruction. Much credit must go to Refn's brilliantly ironic song choices (lyrics like "I don't eat. I don't sleep. I do nothing but think of you," "Do you know the difference between love and obsession?" and "Real human being...and a real hero," are eerily celebratory of misguided cultural morality), sexualizing violence (making it emotional/primal) while lamenting the loss of any human connection. When Driver finally dons a stunt mask near the film's end, he's a Michael Myers level psychopath with the abject veneer of normalcy; pop culture and urban nihilism have been fully synthesized, attesting to Refn's madcap vision of culture and decay as inextricably linked.

It admittedly seems hard to believe that such concepts could manifest so palpably with a director like Refn, who, unto this point, has not displayed these forms of cultural interest. His rigid examinations of masculinity have been about the use of violence as a replacement for language, bodily expression transcending denotative meaning to provide symbolic connotation and, therefore, negating psychological explication, instead interested in physiological assertion. The title is a pun, not just referring to vehicular movement, but "drives" in the psychological sense, the unconscious move towards a final goal or destination: desire. From the pink title credits, to a pivotal slow-motion embrace in an elevator, to Refn's self-labeling as a "fetish filmmaker," Drive is ultimately about the genesis of desire, not tied to any discernible reality (the film is set in Los Angeles, but makes little effort towards "realism"), but linked exclusively to its inversions - Romanticism and Heroism, a post-human psychopath without recourse, fulfilling desire (as the film mirrors his endeavors) under media-constructed mores. Drive is the ultimate meta-film of the 21st century, topping even Michael Haneke and Quentin Tarantino's best efforts, because there's little delineation (consciousness) between the film itself, and an act of criticism. Never breaking the fourth wall or explicitly referencing other films, Drive is truly dangerous, an act of subversion so in-tune with societal disconnection from humanity and feeling, that it runs the risk of being mistaken merely as a product of its time. It is to a certain degree. Yet, the end result's implosion of meaning, pulling back a generic veneer to reveal the constructed mechanizations beneath (lacking any psychology) resonates with an emptiness, a sting few other films are able to build towards, much less deliver on.
Posted by Clayton Dillard at 8:59 PM