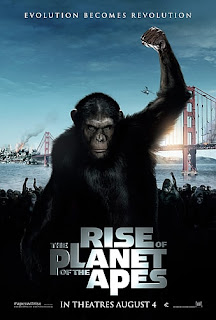 Despite the best efforts of relative newcomer Rupert Wyatt, Rise of the Planet of the Apes can never vanquish a palpable sense of antiquity, that its discrimination allegory has not been properly evolved to deal with a "post-racial" America. Of course, only a self-congratulatory prick would use such a term to begin with, but Wyatt consistently neglects or, essentially, ignores what's required of him: reimagining beyond the CGI-ing of Apes, which is admittedly impressive. Call it a prequel to the 1968 original (the studio sure will), Will Rodman (James Franco) believes he's found the cure for Alzheimer's disease. Testing the drug on Apes (contained in a metal cylinder, which he conveniently keeps in his fridge at home, natch), the cause is particularly of importance to Will, since his Dad (John Lithgow) is battling the disease. Another battle takes shape in super-smart ape Caesar (Andy Serkis), who's given the usual rigmarole of animal abuse, abandonment, and admonishment, before seeking vengeance. Wyatt embraces the film's pulpy, B-movie roots head on, keeping things relatively small, intimate before the Apes do what the title says - this time in modern-day San Francisco. Nevertheless, in spite of some stirring emotional attachment to the monkey (excuse me, ape), little of this plays as anything more than yet another franchise aspiring reboot, equipped with rehashed mythology, exposition overload, and a cliffhanger ending. Wyatt isn't a director without detail (Caesar's ticking time-bomb adequately expresses the lasting scars of oppression), but he favors narrative efficiency (workmanlike is his bag) over avant-garde shocks and subtext. A perfect chance to make a genre classic given current social anxieties and debates, Wyatt ignores much of that, placing product over passion, more concerned with Ape realism than artistic endeavor.

Posted by Clayton Dillard at 8:02 PM