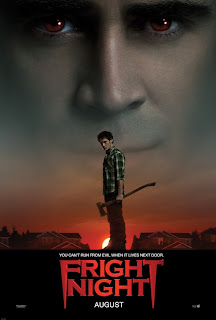 There's a tedium to Craig Gillespie's Fright Night remake that never subsides, commencing during the film's playful, but routine "jump-scare" intro, and continuing past the point that hot-boy cum vampire neighbor Jerry (Colin Farrell) has been staked and burnt into CGI dust. Tom Holland's 1985 original, while troubled by some self-congratulatory satirical issues, at least moves with enough pep, genre knowledge, and gravitas to warrant its existence and status as a minor horror classic, particularly because of its allegorical (if problematic) dealings with homosexuality and AIDS anxieties. Utilizing the genre for both social critique and genre reflexivity, Holland appropriately applies the ethos. The new version's trouble begins with Marti Noxon's script, which often devolves merely into exposition speak and throwaway jokiness. Her background in TV is apparent throughout; many scenes play without urgency, written to more than twice the length necessary, particularly once attention shifts towards TV persona Peter Vincent (David Tennant), whose "bad-boy" schtick feels like third rate Aldous Snow. Moreover, the central relationship between geek-turned-kinda-geek Charley (Anton Yelchin) and disarmingly cute Amy (Imogen Poots) fizzles rather than pulsates - Charley's emergence from adolescence is doubled by the genre's vampire fears (one of horror's oldest thematic concerns), but even this simple task is too much for Gillespie's disappointingly pedestrian eye, directing scenes (and, even worse, editing them) with little regard for consistency, pacing, or basic film mechanics. Fright Night contends for one of the most poorly edited films in recent memory and cinephilic formalists should recognize the incongruities rather easily. Even more lackluster than the film's technical prowess (including almost pornographic use of CGI blood) is any discernible subtext or reason to revisit the original's timely premise, other than the potential for a box office double dip.

A few gags work; Jerry watches reality shows while waiting between feedings and at one point, a contestant claims they "just want to look normal," which nicely suggests a modern ethos as inseparable from mediated presentation, much like Jerry's own appearance (healthy, normal) makes his "disease" all the more frightening. However, little of this is utilized for any real fun or piercing insight, mostly just coincidental overlap. Unsurprisingly, the film pokes fun at the Twilight franchise's Romanticized skewering of vampire lore, but again, it comes and goes without any real wit or specificity. It's merely pop cultural lip-service. Instead of answering Twilight's teeny inanity, Gillespie merely falls in line with recent remake trends, glossing over cultural relevance or perspective for easier mass consumption. The film's saving grace, however, is Colin Farrell, whose personal life nicely compliments Jerry's womanizing, scorching charm. Farrell seethes and moves his eyes rather than speaking, often waiting 3-4 beats longer than expected before answering a question. It recalls the sort of idiosyncratic star-performances of earlier Marlon Brando or Martin Sheen, dynamic but reserved, method but not histrionic. It's a brilliant piece of acting in a film that is otherwise inert, fun and exciting only if standards have been lowered to accommodate for the discouraging remake trends of recent filmmaking.

Posted by Clayton Dillard at 7:12 PM