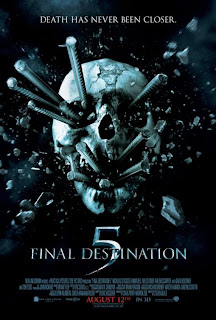 What audiences and critics alike seemed to miss about Scream 4, above all, is that it takes a pop cultural pulse, concerned foremost with evaluating not only the latest generic artistic endeavors, but also integrating its characters' reliance upon technology, which results in their deaths, socially causal instead of arbitrarily "cool." Now, almost ten years after the first Final Destination, the fifth installment takes a cue from Craven's nearly patented brand of modern horror, new director Steven Quale hinging most of the horror upon class issues, technological failure, and workplace anxieties. In addition, Quale makes appropriately goofy use of the 3D, devises several "oh shit!" deaths, and prizes his characters far more than any of the previous installments (perhaps sans the original).

Unsophisticated horror buffs (gore-hounds, they're called) and especially non-enthusiasts will be unable to see through the IMDB plot synopsis while watching the film, which reads, "survivors of a suspension-bridge collapse learn there's no way you can cheat death." Less high-concept than high-aptitude, Quale takes the franchise's now famous central destruction sequence, which threatens the lives of several employees of an upstairs/downstairs, Marxian office; the workers/groundlings are beneath, slaving away, while the bourgeois, college-educated sit behind desks up top. The desk-jobbers are those whose lives are spared, though of course, that's but temporary, as death lurks for each not far into the future.

Quale's concern with inter-office impersonality makes for amusingly morbid fun, especially when prick-ish boss Dennis (David Koechner) asks to speak with someone in the office, needs to be reminded that they were killed in the tragedy (this comes not soon after the funeral). Even better, Dennis laments when hearing that he might soon lose his job, that the "factory workers are usually the first to go." Playful, understated, but exact, Quale navigates social angst precisely, while systematically killing off characters because of their inadequacies (the highlight is a douchebag who refuses to turn off his cellphone). Furthermore, the franchise finally explores moral dilemma with at least considerate thought, now offering survivors a way out: if they kill someone else, they trade lives, taking the years that person should have had. Preposterous, of course, but that's beside the point - those hung up on the film's "ridiculous" premise are unable to feel Quale's multi-layered depth, taking death seriously and irreverently simultaneously - the best way to play it. Final Destination 5 eventually devolves into routine thriller territory, with people chasing each other around a kitchen, pointing guns, but much of what precedes is proficient genre work.

Posted by Clayton Dillard at 2:56 PM