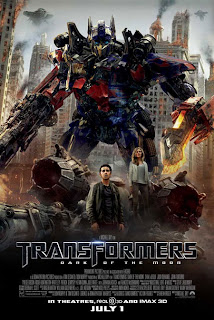 There's more than just the battle between Autobots and Decepticons raging in Transformers: Dark of the Moon, Michael Bay's third (and best) entry into the juggernaut franchise. Cynical, jaded viewers will likely be unable to look deeper than Bay's veneer of explosions, car crashes, and clanging metal (much of which, I might add, is adroitly applied for sensory stimulation) to the palpable sense of urgency and artistic desperation that manifests, especially during the film's final hour, unquestionably Bay's magnum opus, a symphonic, self-reflexive, visceral, maximum display of the filmmaker's undeniable talent for large scale spectacle. Those who hate on Bay's insistence of movement, images, and sound over narrative or character development simply miss the larger context - Bay implicitly formulates cultural discourse through his crude sense of sociological humor, filtered by his distinctly American sensibilities, at once xenophobic and playful, half-joking and half-serious. Bay's honest, terse, and purely proletarian look at the political zeitgeist is sure to enrage "progressive" viewers, because it doesn't wear kid gloves or tread lightly around delicate subject matter. Yet, through all of the wreckage and destruction accumulated, Bay retains a degree of subtlety in his ability to suggest subtextual avenues, rather than overtly allegorize his man-child visual fantasy.

Bay's sensibilities have always tended towards hyper-stylized fantasy, even when dealing completely in the real world. The Rock, for instance, plays with Military-Industrial-Complex anxieties by fetishizing posturing, masculine leads, all while reflecting the post-modern mirror back onto itself, cheeky and self-aware, brash and unashamed to perversely distort reality. Few have given Bay credit for his comic book-style takes on politics and bizarro cultural outlook; instead, leftist critics are curiously enraged by him, somehow threatened by his bravado, either lobbing claims of racism, sexism, or chauvinism, and feeling self-righteous for having "defended" fellow human beings. In a political climate where pacification is rapidly becoming a virtue, Bay's "is-it-satire-or-not" ambivalence strikes a resonant cord - and Transformers: Dark of the Moon is one of his most precise, deft applications.

The film's narrative again concerns Sam Witwicky (Shia LaBeouf), now graduated from college, trying to find a job amidst a tough financial climate. His determination and persistence aren't enough - he must "impress them," as future boss Bruce Brazos (John Malkovich) states before hiring him. Bay playfully sends up knee-jerk political impulses via the Malkovich character, whose capitalist go-getter mindset cannot be stopped, even following the death of a co-worker ("We can't let his death shut us down"). Such a combination of cynical tyranny and extreme violence recalls Paul Verhoeven's Robocop in its seamless genre critique of American bloodlust (and apathy for human loss). Mentions of President Obama, Twitter, and "Weapons of Mass Destruction" facilitate the film's zeitgeist mode, seeking to address contemporary socio-political climate, but only in passing, a preferably concise approach to any larger, didactic discursive attempt.

Interweaving ephemeral narrative exposition with consistently thrilling action sequences, the film messily (but giddily) builds to the last hour, undoubtedly Bay's finest, where his entire oeuvre comes into play, a conglomeration of everything he's been working towards for the past 15 years. Before all-out war on the streets of Chicago, Simmons (John Turturro) says: "One day they'll ask us, where were you when they took over the planet?" Histrionic rhetoric becomes the action film version of Terrence Malick's opening line from the book of Job in The Tree of Life ("Where were you when I laid the foundations of the Earth?"). Each filmmaker becomes immediately concerned with expressing existential woes through image and sound; of course, Bay's is less philosophically driven, but his kinetic brand of transcendental insight deserves a rigorous consideration for its artistic merits, not to be flippantly dismissed as "loud, dumb, and meaningless" as irresponsible critics are so enthusiastic to do.

Likewise, before Sam enters the war-zone, Epps (Tyrese Gibson) grabs him by the arm and states: "It's over. I'm sorry, but it's over." From that moment on, narrative goes underground, and Bay immerses the film in uninterrupted spectacle, heightened by a visually discursive presentation (at one point, a subjective, first-person shooter POV shot is inserted). Could Epps be announcing the death of the film's narrative? Moreover, is Bay suggesting that his post-modern sensibilities have been exhausted, finally entering a penultimate war-zone where he'll have to give it everything he's got? Perhaps, and likely so, a poignant self-recognition of unfiltered aesthetic vision on its last go-round. Indeed, Bay does not disappoint, offering up ingeniously constructed sequences of movement, collision, and scale (the loss of gravity as a building topples over is the highlight). Certainly, the images conform to a post-9/11 anxiety, exploiting while entertaining, large-scale destruction as the visual metaphor for a deterioration of cinematic and cultural understanding. Many call Bay "the death of cinema," but his use of the medium seeks to transcend the complacent filmmaking of his contemporaries, where nothing is banal or mundane. Humorously enough, the most ordinary part of his filmmaking is narrative emphasis, as it should be - cinema shows, is visually driven, and good at eliciting emotion through montage and juxtaposition. By implicitly questioning the medium's subjectivity and offering up numerous examples of towering spectacle, Bay uses the medium appropriately; those who don't appreciate his sensibilities want to tame his unbridled approach, insisting upon narrative to drive the action, instead of the reverse.
Posted by Clayton Dillard at 9:11 AM